It's that time of the year again! Working in the Fiction Department of the Parkway Central Library means that I am always surrounded by excellent books to read. I read over 330 this year, and in narrowing it down to my top 30 published in 2019, I realized that once again I leaned hard into guaranteed happily-ever-afters and fantastic escapism. So this is a fun list—you'll find some great beach reads, some excellent curl-up-on-the-couch-with-a-cup -of-hot-chocolate reads, a ton of romance, and some epic (and not so epic) fantasy and science fiction, with a couple of graphic novels thrown in just for fun. Was it an escapist kind of year for you as well? Let me know in the comments what your favorite books of 2019 were! 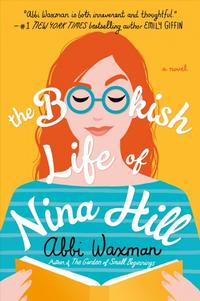 The Bookish Life of Nina Hill by Abbie Waxman
Nina has a perfectly lovely life until a surprise inheritance and a new semi-cute nemesis threaten to upend her comfortable existence. 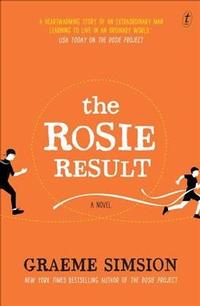 The Rosie Result by Graeme Simsion
Dan Tillman's methodical problem-solving skills might not be enough as marriage and fatherhood can't always be analyzed statistically.

The Right Swipe by Alisha Rai
She's an ultra-successful dating app creator and businesswomen, he's the guy who ghosted her months ago—and is now the face of her competitor's business.

A Little Light Mischief by Cat Sebastian
A gentlewoman and a former thief-turned-lady's-maid team up to get revenge. Romance ensues.

Get a Life, Chloe, Brown by Talia Hibbert
Armed with a bucket list but no accomplice, Chloe turns to fellow tenant Red to help her get a life after a near-death experience.

The Friend Zone by Abby Jimenez
Kristen meets the perfect man at her friend's wedding, but he wants a big family and she can't have kids. Funny and sad (but a guaranteed happy ending).

Waiting for Tom Hanks by Kerry Winfrey
Annie is a rom-com obsessed romantic who is constantly waiting for her meet-cute. But when a movie starts filming in her hometown, she will find out if real life is anything like the films...

Teach Me by Olivia Dade
Rose's beloved class is assigned to a new fellow teacher at her school. But it's hard to hold a grudge when Martin is a genuinely good guy, and also really sexy.

Red, White, and Royal Blue by Casey McQuiston
The son of the president of the United States and the prince of England hate each other. Until they don't... This is the alternate history I needed this year.

Fumbled by Alexa Martin
Single mom Poppy has built a new life for herself, but when football player TK shows up in town, the old spark—and some hidden secrets—might derail all of their lives.

The Flatshare by Beth O'Leary
Tiffy needs a place to stay and Leon needs cash. He works nights and she works days. Through Post-it notes and baked goods, a beautiful relationship develops.

Hook Shot by Kennedy Ryan
Fashion designer Lotus and basketball player Kenan have faced trauma and challenges in the past. Can they be brave enough to be open to each other?

An Unconditional Freedom by Alyssa Cole
Daniel is a free Black man, once kidnapped into slavery and finally rescued, who spies for the Union. Janeta is the daughter of a slave and a plantation owner who is recruited to spy for the Confederacy. Distrust, betrayal, and resentful attraction simmer as they are thrown together.

Any Old Diamonds by KJ Charles
Alex has a plan to get revenge on his cruel father, but it will take a pair of jewel thieves and a whole lot of plot twists to get to the happily ever after.

To Be Taught, If Fortunate by Becky Chambers
A group of interstellar explorers travel from planet to planet in deep sleep, as decades pass on earth and contact dwindles.

This Is How You Lose the Time War by Amal El-Mohtar and Max Gladstone
Two time travelers on opposite sides of a war tirelessly work to undermine each other while at the same time falling in love.

How Rory Thorne Destroyed the Multiverse by K. Eason
This starts as Sleeping Beauty in space and becomes a compelling story of treachery and politics set against the backdrop of interplanetary empires.

Catfishing on CatNet by Naomi Kritzer
A teenage girl on the run, her online friends, and a sentient AI who really likes cat pictures work together to thwart a stalker.

The Ten Thousand Doors of January by Alix E. Harrow
When January Scaller finds a strange book describing the secrets of other worlds, she realizes that her life and those around her have never been what they seem.

The 5th Gender by G.L. Carriger
Tristol lives in exile on a space station, but when a ship from his homeworld docks and a murder is committed, Tristol is dragged into the investigation. A light, cozy, science fiction mystery.

Middlegame by Seanan McGuire
Rodger and Dodger are two sides of the same coin, but they're not-quite-human and dark forces are determined to use them to achieve domination.

Polaris Rising by Jessie Mihalik
A noblewoman on the run and a notorious outlaw team-up in this fast-paced science fiction romance. Book 2, Aurora Blazing, also came out this year and is excellent as well.

Silver in the Wood by Emily Tesh
The wild man in the woods is discovered by the new lord of the manor, and an old evil has taken interest as well.

The Affair of the Mysterious Letter by Alexis Hall
Gender and genre-bent Sherlock Holmesian adventures, complete with shark-punching, vampires, and mad gods.

Magic for Liars by Sarah Gailey
Detective Ivy Gamble is called to solve a gruesome murder at a school for magical teens.

Alien: Echo by Mira Grant
When teenage Olivia and her sister are trapped on a planet being invaded by aliens, it is a race for survival that not everyone will win. Lots of gore and angsty teen romance, set in the universe of the Alien movies. 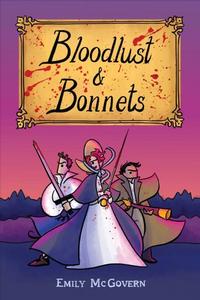 Bloodlust and Bonnets by Emily McGovern
Ingenue Lucy goes looking for a life of passion and excitement, and along the way finds vampires, a talking eagle named Lord Byron, and a vampire hunter named Sham. 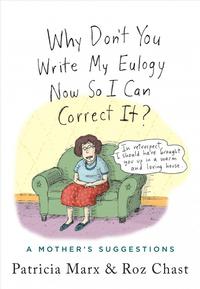 Why Don't You Write My Eulogy Now So I Can Correct It written by Patricia Marx and illustrated by Roz Chast
A collection of witty one-line advice that New Yorker writer Patricia Marx heard from her mother, accompanied by full-color illustrations from Roz Chast.

You can see all of my favorites from 2019, plus my selections from past years as well as many other Staff Picks and recommendations from other librarians, through our curated lists in our Library Community! 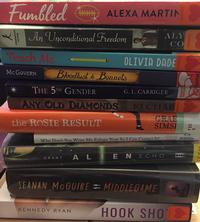 A stack of some of Dena's favorite books read in 2019! 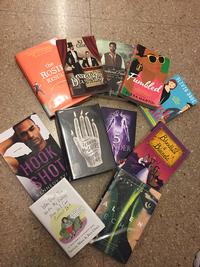