A Dying Man Runs for President

If ever a man simply wore himself out while serving his country, Franklin D. Roosevelt is his name. First elected during the depths of the Great Depression in 1932, he was still on the job twelve years later in the midst of World War II. As "Doctor End the Depression," evolved into "Dr. Win the War," the years of unrelenting stress, little sleep, rich food, and no physical exercise began to take their toll. By 1943, Roosevelt looked awful.

FDR’s daughter, Anna, was dissatisfied with the medical care provided by the President’s personal physician, Admiral Ross McIntire. McIntire said that Roosevelt was suffering from a bad chest cold and would recover soon.  At Anna’s insistence, the President was given a complete physical by a navy cardiologist, Dr. Howard Bruenn. He was alarmed by the results. His patient was suffering from hypertension, high blood pressure, and heart disease. Dr. Bruenn wanted FDR to step back from his awesome responsibilities and begin a life of uninterrupted bed rest. As World War II raced to its conclusion, Bruenn’s treatment plan had no chance of being adopted. He did however succeed in modifying the President’s diet, getting him to take heart medicine and building rest periods into his schedule.

Those who did not interact with FDR regularly were shocked when they did see him. After a visit with the President, former First Lady Edith Wilson confided to Secretary of Labor Frances Perkins, "He looks like a dying man." Secretary Perkins responded, "You must never repeat that to another living soul. The President has a great and terrible job to do—and he’s got to do it, even if it kills him."

Knowing that the President was dying, Democratic Party leaders forced the incumbent Vice President Henry Wallace, an eccentric Iowan who was known for his admiration for the Soviet Union, off the ticket and replaced him with Senator Harry Truman, a mainstream Democrat known for his strong support of Roosevelt’s New Deal.

While it was now clear that America and her allies would eventually win the war, FDR would still have to participate in the ongoing presidential campaign. At a time when there was already a strong whispering campaign about FDR’s health, people around the President worried that by campaigning, the President would reveal just how fragile he actually was.

Fortunately, FDR could still summon his old energy and verve for brief periods of time. When the Republicans embraced a totally false story, that the President had wasted a fortune by sending a naval destroyer to fetch his lost Scottie, Fala, FDR gave a devastating response on the radio. He told listeners that Fala had not been the same dog since becoming enmeshed in a web of lies, saying that the Scotch soul of the practical and thrifty animal was outraged. Roosevelt’s Republican opponent, Thomas Dewey, did not find the broadcast amusing, but the voters did. FDR lasted a grand total of 83 days before Truman became president. 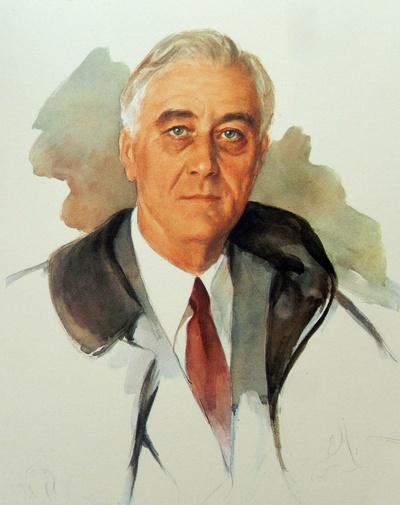 The famous unfinished portrait of US President Franklin D. Roosevelt, started by Elizabeth Shoumatoff on the day of his death. 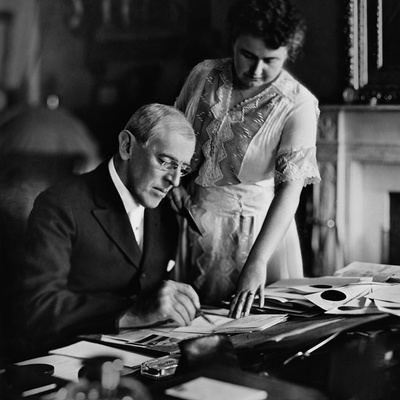 Senator Harry Truman became the 33rd President of the United States, after FDR died 83 days into office.
Add a Comment