During the years that Dwight Eisenhower served as Supreme Allied Commander in Europe, he had to contend with some of the most demanding and difficult personalities on two continents.  The shortlist included Franklin D. Roosevelt, Winston Churchill, Charles De Gaulle, and General Montgomery, among others. However, of all the public figures that Eisenhower had to deal with in war and politics, he never loathed anyone more than a politician from America’s Heartland, Senator Joseph R. McCarthy (R-Wisconsin).

During a period when Americans were deeply anxious about the possibility of nuclear war and signs that the world’s Communist powers were on the march against the U.S., Senator McCarthy engaged in a four-year campaign of terror, seeking to ferret out Communist agents and their allies in the federal government and other major institutions in the United States. Assisted by two key aides, Roy Cohn and G. David Schine, McCarthy relied on lies, half-truths, and innuendo to attack his victims. The Senator almost always conducted these investigations behind closed doors. During this period, the careers of hundreds of innocent women and men were destroyed.

Joe McCarthy had already been in the U.S. Senate for six years when Eisenhower first sought the presidency in 1952. Eisenhower, who had a strong basic sense of fairness, found the Senator’s conduct deeply offensive. When the two men campaigned in Wisconsin together, Eisenhower insisted that they ride in separate cars. Things got much worse and quite rapidly.  McCarthy had been attacking Eisenhower’s professional mentor and personal friend, former General George C. Marshall, as the person responsible for losing China to the Communists. Eisenhower had prepared a campaign speech that included a strong defense of Marshall. The political people around Eisenhower begged him to delete this passage saying that he must not humiliate McCarthy in his home state. The novice politician eventually agreed, but his face and neck turned bright purple indicating just how angry he was.

When Eisenhower entered the White House in 1953, many political observers assumed that McCarthy would go easy on a fellow Republican, but they were wrong. Senator McCarthy had become addicted to the white, hot glare of media attention. He was not about to give it up for anyone. By this time, McCarthy was also well aware that the President disliked him, so there was nothing to lose. For his part, while working behind the scenes to damage McCarthy, Eisenhower was determined not to get down in the gutter with someone he viewed as a political assassin. While the Senator did many things to provoke the President, Eisenhower did his best never to respond in public.

In April of 1953, Senator McCarthy dispatched his two young aides, Roy Cohn and David Schine, on a fact-finding tour of Europe. McCarthy wanted to know if Americans working in Europe were aware of and sufficiently concerned about the Communist threat. To find out, his aides spent 18 days touring U.S. army bases, embassies, and special libraries established by the government.

Authoritarian regimes cannot tolerate opposing ideas. Prior to and during the war, the Axis powers banned books, deported troublesome writers, and often staged the burning of banned books as propaganda events. Once such forces are unleashed, it’s impossible to say where things will end. Italy’s Benito Mussolini found detective novels offensive—too middle class—and banned them.

Following World War II, the American government established special libraries throughout Germany and Austria which highlighted American culture by spotlighting a broad range of U.S. writers. These libraries became special targets of opportunity for Cohn and Schine. The two men identified huge numbers of books in these facilities as either written by Communists or espousing what they considered to be pro-Communist views. These visits attracted attention from the press, which quickly dubbed the visiting Americans, "The Junketeering Gumshoes."

To the everlasting discredit of the U. S. Information Service, the agency knuckled under completely to the Cohn-Schine duo. Officials on the ground in Europe only wanted to rid themselves of the offending books as quickly as possible. They quickly reached a decision that was both stupid and tone death: They decided that the offending books would be burned. While those responsible hoped that there effort at censorship could remain a secret, word soon leaked to the New York Times. Within a couple of days, the President was asked about it at his press conference. Eisenhower kept his cool, but he was furious that the subject had even come up.

On June 14, 1953, the President flew to New Hampshire to deliver the commencement address at Dartmouth. In the midst of a rather conventional address, Eisenhower suddenly veered off script saying, "Don’t join the book burners! Go to your local library and read every book on the shelf." He went on to ask how America could ever hope to defeat Communism, or even understand it, unless books about it were easily accessible to the public. While the President couldn’t have known it at the time, by June of 1954, Joe McCarthy would be finished. When the American people had a chance to actually see the Senator from Wisconsin on television for more than 60 days, during the Army-McCarthy Hearings, they did not like what they saw.

Demagogue: The Life and Long Shadow of Senator Joe McCarthy by Larry Tye

A Conspiracy So Immense: The World of Joe McCarthy by David M. Oshinsky

You can browse our catalog for more information on presidential history and politics, as well as our databases for more historical digital resources. 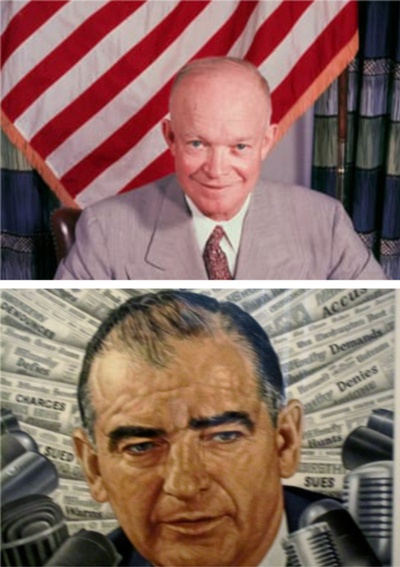 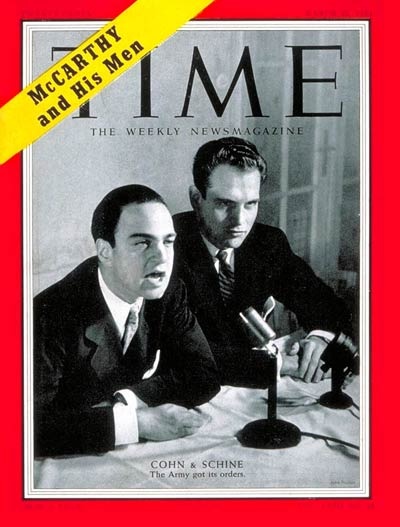 Roy Cohn and G. David Schine
1 Comment | Add a Comment
Thank you for sharing such great information. It has help me in finding out more detail about
Arjun - KALYAN