Philadelphia proudly joins the many cities and states around the nation who have chosen to officially recognize and celebrate Indigenous Peoples’ Day in lieu of Columbus Day. This cultural shift seeks to recognize the harm done by colonization and to illuminate and honor the continued history of Indigenous Peoples in the Americas. In 2022, the holiday will fall on Monday, October 10th. To learn more about advocating for the holiday and find related lesson plans and resources, check out Illuminative’s Advocate Guide. The Free Library would like to recognize that the city of Philadelphia lies within the traditional territory of the Lenni-Lenape people. We acknowledge them as past, present, and future caretakers of this land.

This year’s celebration comes as a new wave of Indigenous leaders make their mark in the U.S. Federal government. As Interior Secretary, Deb Haaland (Laguna Pueblo) created a new unit within the Bureau of Indian Affairs devoted to investigating missing and murdered Indigenous women, and she was recently instrumental in getting land back into the hands of the Rappahannock Tribe. Sharice Davids (Ho-Chunk Nation) the first openly lesbian representative in the state of Kansas, has also authored a children’s book. This past August in a special election, Mary Peltola (Yup'ik) became the first Alaska Native to serve in the U.S. House of Representatives, and she's determined to save the threatened salmon population.

The movement to protect land and Indigenous rights spans the globe. Learn about young Indigenous activists taking action on these shores and those fighting for visibility and change around the world.

This holiday is a great opportunity for adults and families to learn more about the true history of this nation, and that of the on-going existence and resistance of Indigenous’ Peoples. Read about the history of our region, originally called Lenapehoking. Learn how to practice land acknowledgement. You can also dive deeper with learning resources from last year’s Virtual Week of Action including recommended reading, lesson plans for the classroom, and suggested actions in support of our Indigenous communities from IPD Philly.

On Sunday October 9th, come to the Indigenous Peoples’ Day Celebration at Bartram’s Garden. This long-running event will honor Indigenous heritage past, present, and future. Experience dance performances from Aztec troupe Tonantzin Yaotecas, Native Nation Theater, and others. Enjoy presentations from community organizers, kids’ activities and storytime, and a vendor marketplace. This free event is rain or shine!

On Monday October 10th, attend the official Indigenous Peoples’ Day Philly at Shackamaxon (Penn Treaty Park) According to organizers, the event “provides a space for different Indigenous communities in Philadelphia to increase awareness and encourage dialogue about Indigenous history, resilience, and strength from 500+ years of Indigenous resistance in the Americas”. Now in its sixth year, IPD Philly has been a vital force in campaigning for the official recognition of the holiday since 2017, a battle finally won last year. Experience the reclamation of this day through family-friendly story-telling, music, dance theater, and presentations from local Indigenous artists and community members.

Check out other local Indigenous-led organizations such as We Are the Seeds for further guidance and on-going events.

Share Indigenous stories with the young learners in your life. Check out titles available in our collection, including First Nations Board Books, Picture Books for Indigenous Peoples’ Day, Indigenous Voices for Young Adults, or this Native American Heritage Month Booklist for Teens. Who are your favorite Indigenous writers or thinkers? Let us know in the comments below. 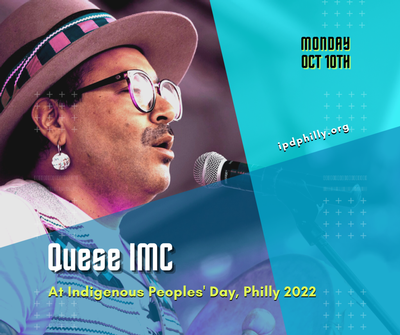