A History Minute: The Bikini

It's summertime, that means many Philadelphia families are taking trips to the “shore” - yup, the Jersey Shore. You might not see Snooki, The Situation, or Pauly D, but odds are if you take a walk on the beach you'll see many women wearing bikinis. So today's question is: Where did the bikini come from?

You might be surprised to know that during World War II the government directed the amount of cloth in women's beachwear be reduced by 10 percent, in an effort to conserve fabric that might be needed in the war effort. This restriction caused many swimsuit manufacturers to create swimsuits with bare midriffs – but the true bikini wasn't invented until after the war.

Two Frenchmen are known as the inventors of the bikini, Jacques Heim and Louis Réard. In 1946, Louis Réard, an engineer, named his design "Bikini" after a Pacific Ocean atoll and Jacques Heim named his design "atome", the French word for atom, which he said was the world's smallest bathing suit. In response, Réard created a bathing suit with only 30 inches of fabric – it was so small, he couldn't find a model to wear it in public (eventually he hired a nude dancer who was photographed wearing one).

The bikini was considered too controversial and was banned in many European beaches, but during the 1950s many movie actresses, such as Diana Dors, Marilyn Monore and Jayne Mansfield were photographed wearing them and the bikini's popularity grew. In the 1960s, the song Itsy Bitsy Teenie Weenie Yellow Polka Dot Bikini was released along with a wave of beach-themed movies, like the James Bond film Dr. No, which featured an iconic Ursula Andress in a bikini (with a knife on her belt), and One Million Years B.C., where Raquel Welch played a cavewoman in a fur bikini.

Today, the bikini is commonplace, but it's interesting to know it all started from fabric rationing.

Interested in the history of fashion? Check out these resources: 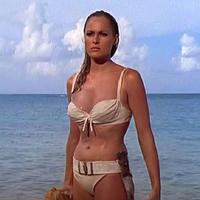 Ursula Andress as Honey Rider in the film Dr. No (image source: wikipedia) 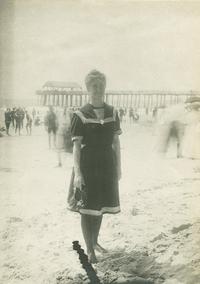 Beach wear in 1907 (from our Digital Collections)
1 Comment | Add a Comment
Never knew that the bikini was invented by Frenchmen. Nice post! Greetings from
Angela - New Jersey