Born in England, Eliza Poe was the daughter of two actors. She made her stage debut at the age of nine as a character named Biddy Bellair in David Garrick’s farce Miss in Her Teens. Coming to America with her mother in 1795, Eliza performed in a number of successful productions. She married fellow actor Charles Hopkins at the age of 15, and six months after his death in 1806 married David Poe, Jr. Eliza had three children with David: William Henry Leonard in 1807, Edgar in 1809, and daughter Rosalie in 1810.

The Rare Book Department is home to two extraordinary mementos of Poe's mother. The first is a copy of Charlotte Temple by Susanna Rowson, signed "E. Poe Born Arnold. 1807." In 1807 Eliza was 20, already widowed and recently remarried. Susanna Rowson was not only a novelist but an actress who performed in the same circuit as Poe's mother. Their paths crossed in both Alexandria, Virginia and Boston.

The other item is a miniature portrait on ivory. According to biographer Kenneth Silverman, Poe carried this miniature with him on his final trip to Richmond in 1849, and must have had it in his possession at his death, although what happened to it immediately following is anybody’s guess. The miniature was used by John Ingram in his biography (1880), then lost, but subsequently recovered by an American, Ivan Katz, at a Paris flea market in 1955. It is the only known portrait of Poe’s mother. This precious object, together with a small, empty jewel case, was long thought to constitute Edgar’s entire inheritance from his parents, who both died when he was two years old. 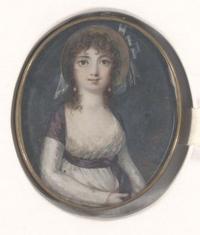 Elizabeth Arnold Hopkins Poe (1787–1811). Portrait on ivory. Gift of Colonel Richard Gimbel.
2 Comments | Add a Comment
How could Poe's mother DIE at age 2 ? Certainly not old enough to have carried and given birth to a baby. Either this girl was Poe's DAUGHTER, or the age given for his Mother's death is incorrect. Wikipedia says she was Poe's Mother but she died at 23 or 24.
Carolyn Croll - Philadelphia
Thanks for clarifying the information about Poe's Mother. Most interesting article. The treasures in the Rare Book Dept. never fail to amaze.
Carolyn Croll - 2manybabas@comcast.net