Scott O’Dell once summed up being an author in three simple words: “Writing is hard.” As a writer of children’s historical fiction, he excelled in creating his own story out of real events. He found inspiration in history books and in oral histories. He said, “Research is what I enjoy most. I often write of events, people, and backgrounds that I know little about, just because I want to know more.”

Scott O’Dell was born Odell Gabriel Scott in Los Angeles, California on May 23, 1898. His father, Bennett Mason Scott, worked for the Union Pacific Railroad and the family frequently moved throughout Southern California during his childhood. At that time, California was still the frontier and still held the footprints of Spanish settlers, fortune hunters from the Gold Rush, and native Indian peoples. He would later recall, “This was a small world, but a world in microcosm. It was bounded by the deep water and wharves and mud flats of San Pedro Harbor. By the cliffs and reeds of Point Firmin and Portuguese Bend. By the hills of Palos Verdes, aflame with wild mustard in spring, lion-colored in summer.”

After graduating high school, he enlisted in the Army during World War I. He attended several colleges, but said he never learned to study and could not muster any enthusiasm for memorizing textbooks. Instead, he moved to Hollywood and taught classes in writing screenplays while working for Paramount Pictures. In 1925, he served as a cameraman on the 1925 Metro-Goldwyn-Mayer production of Ben Hur in Rome, where he also attended classes at the University of Rome. Returning to California, he worked in journalism and released three novels for adults. While at the Los Angeles Daily News, a typesetter transposed his name from “Odell Scott” into “Scott O’Dell” and he liked it so much that he had it legally changed. With the encouragement of his friend, the children’s book author Maud Lovelace, he decided to publish Island of the Blue Dolphins as his first children’s novel.

Island of the Blue Dolphins is based on the legend of “The Lost Woman of San Nicholas Island.” O’Dell adapted the true story of a native woman from the Channel Islands who was left behind in 1835 when the dwindling populations of Indians were removed from the islands. Subsequent rescue parties were unsuccessful in locating her until 1853, when Captain George Nidever arrived on the island to find a 50-year-old woman who smiled and talked in an “unintelligible” language. She was taken to the Mission Santa Barbara and given the name “Juana Maria.”

When Scott O’Dell published Island of the Blue Dolphins in 1960, it became a worldwide success and went on to win the Newbery Medal and was adapted into a motion picture. He continued writing historical fiction for children, winning the Newbery Honor for his next two novels, The King’s Fifth (1966) and The Black Pearl (1967). O’Dell would later write the sequel to Island of the Blue Dolphins, called Zia, in addition to 25 novels over the course of his career. In 1982, O’Dell established an award to honor authors, especially new authors, of historical fiction for children and young adults. The Scott O'Dell Award for Historical Fiction is given annually and seeks to continue O’Dell’s efforts to create interest in the genre.

A manuscript for Island of the Blue Dolphins is part of the Children’s Literature Research Collection here at the Free Library of Philadelphia. The opening page of the manuscript is handwritten by Scott O’Dell. The remainder of the document is a typescript that includes notes between O’Dell and his editor at Houghton Mifflin. Though it only highlights the end of the creative process, this final draft includes supplemental pages and revisions that allow researchers to understand the amount of work that goes into each book. This collection, though small, represents the best of children’s historical fiction. For more in-depth information about the Scott O'Dell papers, please see our online finding aid!

For more about Scott O'Dell and all of our other authors and illustrators, visit our Facebook page or follow us on Twitter for more updates from the Children’s Literature Research Collection. 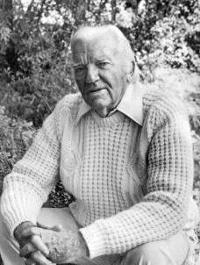 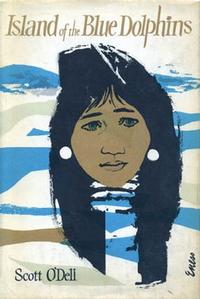 The cover of Island of the Blue Dolphins.
The first page of the manuscript for Island of the Blue Dolphins.
5 Comments | Add a Comment
Truely an amazing author. What other memorabilia exits and is it on display?
Kim - Andorra
The other items in this collection are invitations and programs for awards ceremonies, and a centerpiece from one of the ceremonies. None of the collection is currently on display.
Adrienne -
Thanks! That was one of my favorites in sixth grade & it's wonderful to know that the manuscript is here in Philadelphia!
joel - Philadelphia
He is an awesome author and one of my favorite author. More items? AJ Alvarez - US
Library is the very good resource to learn anything we want. yt886 - Fuerth