The world lost an eloquent and acerbic powerhouse of a writer and political commentator with the passing of Gore Vidal on Tuesday, July 31, at the age of 86. The author of 25 acclaimed novels, several collections of insightful essays, two memoirs, and several scripts for the stage and screen, Vidal "was among the last generation of literary writers who were also genuine celebrities—fixtures on talk shows and in gossip columns, personalities of such size and appeal that even those who hadn't read their books knew who they were," in the words of the Associated Press. In addition to his prolific writing career, Vidal twice ran for public office (in 1960 and 1982), and twice lost. He once said of himself: “I’m exactly as I appear. There is no warm, lovable person inside. Beneath my cold exterior, once you break the ice, you find cold water.”

Many will remember Gore Vidal for his sharp and pithy comments on politics and modern culture. Among his more choice quotes: "A narcissist is someone better looking than you are;" "There is no human problem which could not be solved if people would simply do as I advise;" and "Every four years the naive half who vote are encouraged to believe that if we can elect a really nice man or woman president everything will be all right. But it won't be."

The Free Library has an extensive collection of Vidal's writing, including essay collection The Last Empire, memoir Point to Point Navigation, Julian--which many consider to be his best novel--and more. 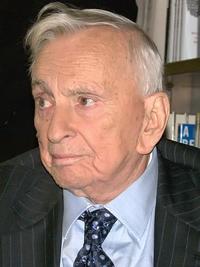 Gore Vidal | Photo credit: David Shankbone (Creative Commons)
1 Comment | Add a Comment
Trolling the Internet for famous Gore Vidal quotes. These are my favorites: "Write something, even if it's just a suicide note." "I'm a born again atheist." "The three saddest words in the English language: Joyce Carol Oates." "The four most beautiful words in our common language: I told you so."
Don - Philadelphia