In Stephen King's short story, Sometimes They Come Back, ghosts and demons haunt a man who is forced to confront his traumatic past. It would seem Stephen King is living out one of his own stories in a truth is stranger than fiction scenario with his new book Doctor Sleep, a sequel to one of his most popular and best-selling novels, The Shinning.

When King finally decided to write a sequel to the 1977 horror novel about a haunted hotel, a boy with psychic abilities, and a father who descends into madness (slightly based on King's own struggles with drugs and alcohol at the time), the story of The Shining itself had since taken on a life of its own. First, there was the film adaptation by Stanley Kubrick, lauded by critics as one of the greatest horror movies of all time. King would go on record though as being less than enthused about what he saw on screen (later going on to write and produce a television mini-series adaptation of The Shining that more closely followed the events that took place in the book). And if you have lots of free time on your hands, you can read the theories, criticisms, allusions, and interpretations of Kubrick's film (most recent and outlandish the documentary Room 237), but be careful falling down that internet rabbit hole!

Doctor Sleep picks up a few years after the events in The Shining and focuses on an adult Danny Torrance, still haunted by the spirits of the Overlook Hotel. He meets up with a special twelve-year old girl named Abra who has familiar psychic powers, and the two must fight of a tribe of murderous paranormals called "The True Knot".

Check out the creepy book trailer for Doctor Sleep!


It's near impossible to pick only five favorites or five "must reads" in Stephen King's bibliography. Instead, here's a "Friday Five" of some of Uncle Stevie's somewhat lesser known and read works, all available from our collections.

What are some of your favorite Stephen King titles or works by other favorite genre authors? 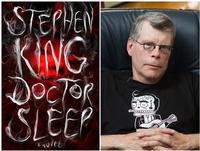 Stephen King's newest novel, Doctor Sleep
3 Comments | Add a Comment
Have read all except 'On Writing...', but I would add THE STAND, my first exposure to Stephen King, and this remains my favorite. I would also add, IT, ROSE MADDER (awesome), THINNER, BAG OF BONES (SK really stumped me with that one), THE DARK HALF (OMG). I have to stop now because I have not picked up a King novel yet I did not like.
Sha - Philly
Thanks for your comment Sha! And it's true, it's hard to pick just one or a few Stephen King favorites ; )
Peter SM - Philadelphia
Great post, thanks for sharing
John - Madrid