Hi, my name is Dena and I’m a fiction librarian in Philbrick Hall at the Parkway Central Library. You might have seen me there excitedly recommending the best vampire book ever written (Sunshine by Robin McKinley - trust me) or convincing a teen and her dad that they really want to have a good cathartic cry while handing them copies of The Book Thief by Markus Zusak.

That’s what I do – I try to match up books with people who will love them.  It’s a fantastic job and I love it!

It also helps that I read a lot. I mean – A LOT. I read over 250 books this year. As you can imagine with that kind of volume it becomes pretty hard to keep track, so I started keeping lists online back in 2007. Of course, once I had that kind of data at my fingertips, it became clear that I should do something with it. Last year I decided to do a month-long countdown of my favorite books on the Philbrick Hall Facebook page. On the last day of the year I compiled them all into a booklist on the Free Library's website. That was so much fun I did it again this year.

So, how did I narrow it down?

This year I only chose 18 favorites out of 254 books. I did it two ways: Firstly, because most best-of lists are just of stuff released in the past year I did that as well and only selected books published in 2013 (with one exception for a book from December 2012) to be in the running for this list. It’s a shame, really, because I read a lot of older stuff that hasn’t made it onto any of my lists because it was published in the wrong year. One of these days I’m going to make an "All-Time Favourites" list and share it. There’s just too much good stuff out there. On the flip side, I read a lot of stuff that hasn’t even been published yet, thanks to the generosity of publishers who send out advanced reading copies (Thanks, guys!). Some of those books will make it onto next year’s list.

Secondly, I limited my list only to those books available from the library either as print books or ebooks. That’s also a hard decision because there are so many good self-published books and ebooks out there from publishers who don’t sell to libraries. But it wouldn’t be fair to tell you all about this amazing romance from Australia but, "ha ha!", you can’t get it from the library (Untamed by Anna Cowan – you can buy it on Kindle if you want).

So, what do I like reading? That’s probably the most important question because if what I like isn’t your cup of tea my list won’t do much but tell you what NOT to read. Truthfully, it’s probably easier to list what I DON’T like. I’m not a fan of Westerns. I don’t like sad endings or depressing stuff. Mysteries, suspense, and thrillers don’t do much for me (but the Marcus Didius Falco mysteries by Lindsey Davis are fantastic!) Of course, there are exceptions in every genre but for the most part those are the books I won’t read unless I have a very good reason to do so. Besides that, books that are too scary or bloody give me nightmares.

What I do love to read: Funny books. There’s nothing like being on the bus or subway trying desperately not to look like a crazy person because I just read something that is threatening to make me laugh out loud. I also love travel books. Not guide books, but memoirs or stories from people who have actually gone to places that I always (or never) wanted to go. J. Maarten Troost and Bill Bryson are great examples of that genre. I find history books fascinating, especially if they aren’t dry and academic. I just read a book about the history of cooking implements (Consider the Fork by Bee Wilson) and it was compelling.

I love romance, because the real world is hard enough and I like a guaranteed happy ending. I especially like it when the romance isn’t formulaic or if the writing is brilliant. Courtney Milan is my go-to historical author, Victoria Dahl fills the contemporary spot, and Isabel Cooper hits the time-traveling, demon-hunting, Victorian romance niche.

I’m a huge fan of science fiction and fantasy. Terry Pratchett is my literary God (although his more recent stuff is disappointing). Neil Gaiman can do no wrong and Jasper Fforde is a mad genius.

Truthfully, if it’s a good book, I don’t care if it’s aimed at kids, teens, or adults. I’m pretty omnivorous when it comes to what I read.

So if any of this stuff sounds like fun to you, come find me in Philbrick Hall and tell me all about what you like to read. Maybe we can find you something else fantastic to fall in love with. You can even give me some suggestions for what I should read next! 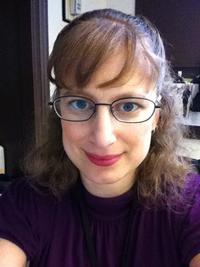 Dena
The Golem and the Jinni
William Shakespeare's Star Wars
5 Comments | Add a Comment
Dena, sorry you dont like mysteries, thrillers, etc. I bought a tablet specifically because we went abroad this past fall and I didnt want to lug 40 lbs of paper with me. Using the resources of ebooks from FLP I have been rediscovering Dick Francis and Stuart Woods, etc. Great fun and one of the joys in my life! I once read lots of nonfiction for my work but now am freed of that so I can enjoy this "trash." Guess I am a simpleton at heart but page-turners are for me. Give Dick Francis a try. With digital technology this century is starting out nicely.
Gtnsteve - gtn
Do you have the new book called marolyns red diary if so can you hold it for me
JamesBeck - Chest it hill
James, we unfortunately do not have the book, Marilyn's Red Diary, in our collection. However, you could request it through our Interlibrary Loan Department and we will try to get it for you from a different library system. You can make this request online at http://www.freelibrary.org/ill/index.htm or call ILL at 215-686-5360.
Peter - Free Library staff
Do you have the new book called marlins red diary or books on phila poams
James d beck - Chestnut hill
James, we do not have the book, Marilyn's Red Diary. We don't have any anthologies of poems about Philadelphia, but librarians in our Literature Dept would be happy to help you find specific poets from Philly. Stop by the Central Library or reach them at 215-686-5402.
Peter - Free Library staff