Knock Knock: My Dad's Dream for Me by Daniel Beaty and Brian Collier - Winner of the 2014 Coretta Scott King Illustrator Award

Today's children's book review is a real heartbreaker. Poet Daniel Beaty performed a piece of slam poetry called "Knock Knock" about his relationship with his father. When Daniel was three years old, his father was incarcerated, and his absence throughout Daniel's life was immense. Like many children today, his parent was not there to answer his questions and to help him become a man. Beautifully illustrated by celebrated artist Brian Collier, Knock Knock: My Dad's Dream for Me was awarded the Coretta Scott King 2014 Illustrator Award.

Knock Knock: My Dad’s Dream for Me by Daniel Beaty, illustrated by Bryan Collier

Your heart sinks already just a few pages in, after two large page spreads of a smiling-as-he-pretends-to-be-asleep boy who springs into his father’s arms for a good-morning hug. On the third page spread, there’s just an empty doorframe instead of a waiting father. And on the next two pages, Collier’s expansive collage and watercolors, previously full of soft textures and warm folds, change to a sharp-edged reality of the boy alone with his mother. Collier shrinks these scenes into smaller frames, boxed in by reds. Where the boy’s face glowed, filling up the page, Collier paints him smaller instead, and in profile, and downcast, as “morning after morning he never comes.” Beaty’s words glow on their own, shot through with genuine feeling. “Papa, come home, ‘cause I want to be just like you,” this little boy says, “but I’m forgetting who you are.” Set against Collier’s fractured collage streetscape that features diaphanous elephants marching in a chain (a motif picked up from the boy’s bedroom walls), the text moves from sad to heart-wrenching. Luckily, for the reader, this low-point--a stricken boy staring at himself in a mirror, in a room where such love once bloomed--is where the book turns.

The boy reads a letter from his father saying he won’t be coming home. In it, the father distills as much advice as he can and the illustrations show the boy growing large on the page, at first just literally regaining the size his face had in the first few pages, but also growing and maturing into a successful young engineer who has his own children with him as he breaks ground on a big construction project. The illustrations in this part are still boxed in, still fractured by bright lines, but these suggest the engineering work at hand more than the emotional shrinking from earlier. Again the text is perfect matched, as Beaty changes the juvenile “knock knock” game they played into a command for the son to “knock knock down the doors” the father could not. This reader--also a father and a son--couldn’t stop the tears as the final message “for despite my absence you are still here” resolves into the final image of the now adult son hugging his vanished father. This book will have special resonance and power for children whose lives with their parents have been disrupted by addiction, incarceration or violence, but will touch many more. 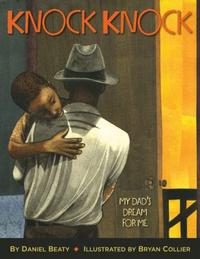 Knock Knock: My Dad's Dream For Me by Daniel Beaty and Brian Collier
2 Comments | Add a Comment
what is the intended age range of this book?
jone - philly
Hi Jone, This book works with any kids, preK through 3rd or 4th grade. Even older children will appreciate its deep feeling and appreciate the illustrations, especially if they are touched by incarceration.
Joel N. - West Philadelphia