Cinderella Around the World

To celebrate Women's History Month, Wadsworth Library's Children's area is focusing on one very popular woman: Cinderella. Cinderella is more than a quick bedtime story or Disney movie. The story of a young woman who is abused by her family and eventually finds happiness runs through the oral traditions of many cultures. Many of these stories have been retold as picture books that the Free Library of Philadelphia owns. Let's take a look at some of the Cinderella variations around the world: 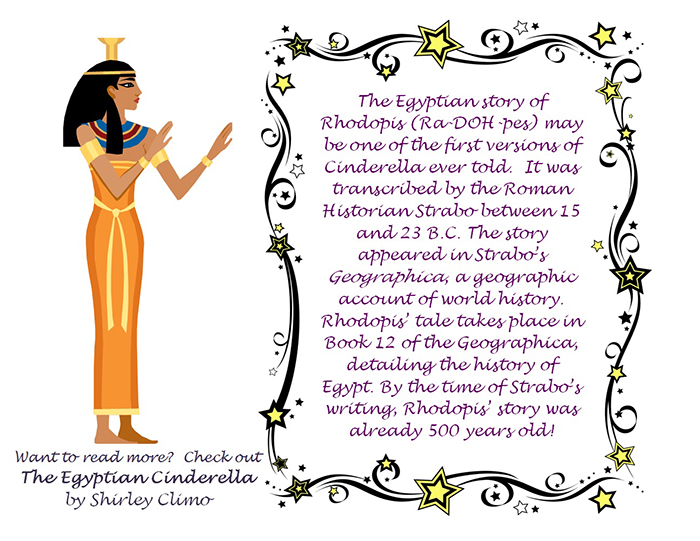 The story of Rhodopis is unusual because we can trace the story back to a real person. Rhodopis was a Greek slave in ancient Egypt. She was a friend of the storyteller Aesop -- known for his many fables. Rhodopis married the Pharaoh Amasis and became Queen of Egypt. From a slave to a queen -- now THAT's a Cinderella story!

If you'd like to read a bit more about Rhodopis, check out Shirley Climo's The Egyptian Cinderella. 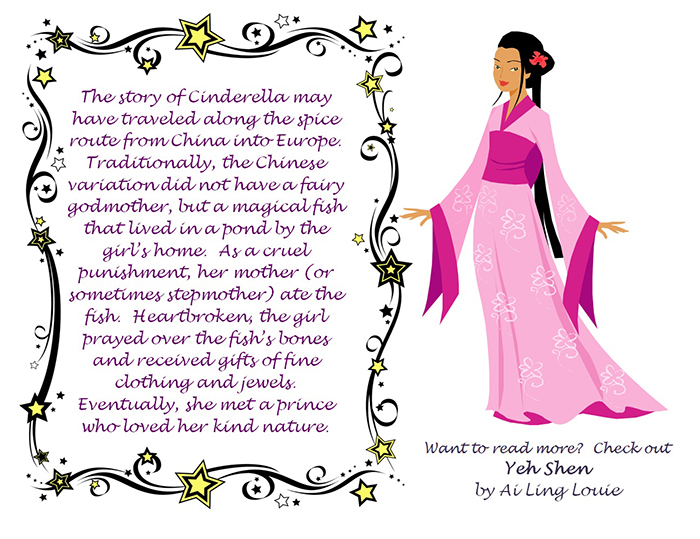 The story of Yeh Shen (which is sometimes written as "Ye Xian") is one of the older versions of the Cinderella story. As a written story, the tale can be traced to the 9th century. That version takes place in the 3rd century B. C. Because the story was originally told orally, it may have existed for centuries before being captured in ink or previously written version may have been lost to time.

If you'd like to read a bit more about Yeh Shen, check out AI-Ling Louie's Yeh Shen: A Cinderella Story from China. 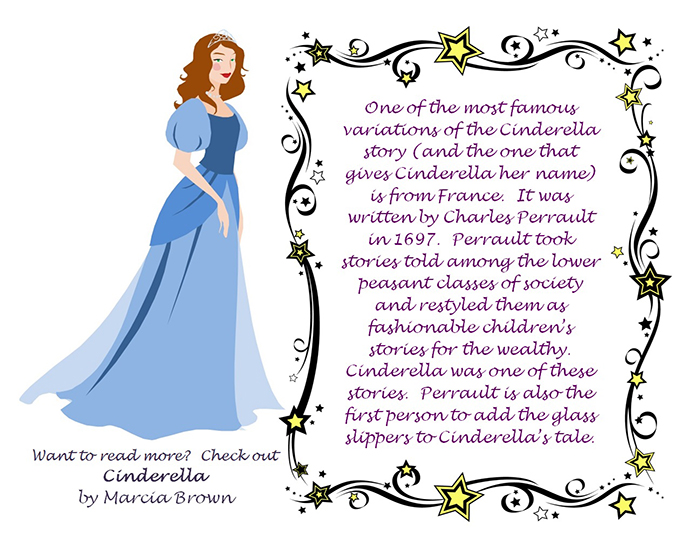 Charles Perrault is famous for his addition of the glass slippers to Cinderella's story. You may have heard that the glass slippers were an incorrect translation from French to English. This isn't true! Many sources incorrectly cite that Perrault wrote the story with Cinderella receiving a pair of squirrel-fur trimmed boots from her Fairy Godmother. The French term for the fur boot, pantoufle de vair (slipper of fur) is similar to pantoufle de verre (slipper of glass). Perrault actually wrote "verre." In addition to this, "vair" was an archaic word when Perrault was writing Cinderella. 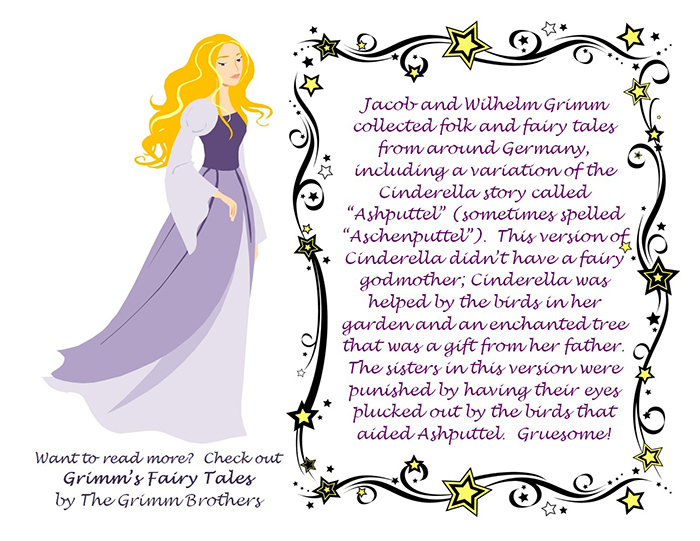 The Brothers Grimm collected German and Scandinavian stories, legends, and tales told orally among the peasant classes of central and northern Europe. Their book, Kinder- und Hausmärchen (Children's and Household Tales) made them famous around the world. The book was originally published in three volumes: The first in 1812; the second in 1815; and the final volume in 1822. Overall, the series contains 170 tales.

Want to Read more? Give Grimm's Fairy Tales a read by the Brothers Grimm! 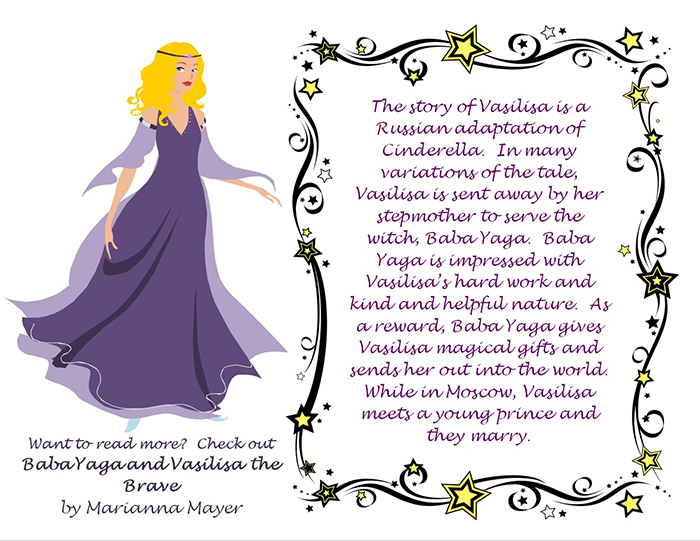 The story of Vasilisa frequently includes the folk character Baba Yaga. Baba Yaga is an elderly witch found throughout Slavic folklore. She is described as living in a house with the legs of a chicken, flying in a large mortar and pestle, and having teeth made of iron. In some stories, Baba Yaga is cruel and loves to steal and eat children; in other stories she helps those who are polite and hard-working. In all versions, though, she's always a bit grumpy!

Interested in Vasilisa's story? Read about her in Baba Yaga and Vasilisa the Brave by Marianna Mayer. 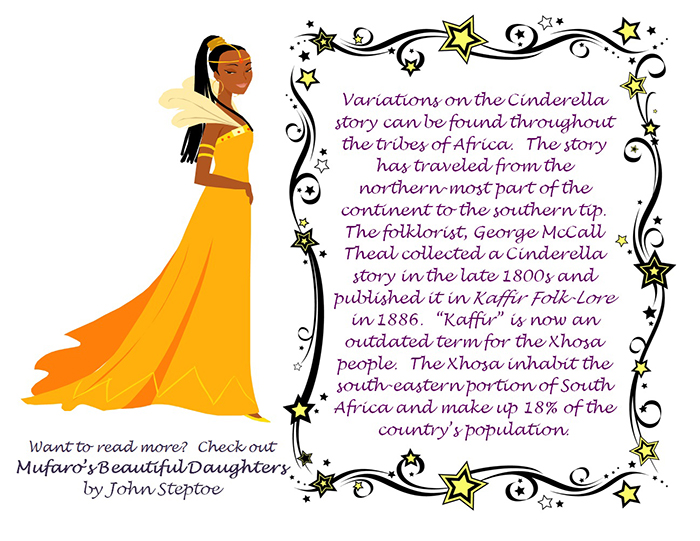 The Xhosa people live in the southern and central-southern parts of Africa. In the country of South Africa, there are approximately 8 million Xhosa and the Xhosa language is the second most popular language after Zulu. Famous Xhosa include Nelson Mandela (1918-2013), Bishop Desmond Tutu (1931- ), and Thabo Mbeki (1942- ). 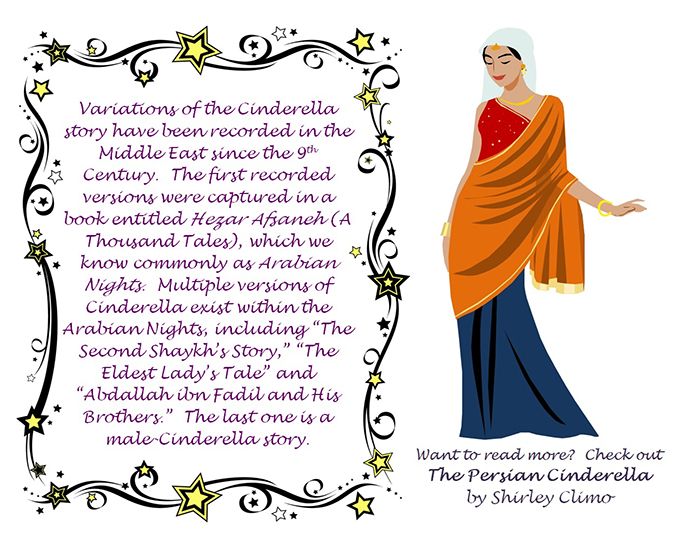 The Arabian Nights is a collection of folklore written in Arabic. The stories were collected over centuries by various transcribers from west, central and south Asia and northern Africa. Although the Cinderella story is included in several variations, the most popular works from the collection are probably "Ali Baba and the Forty Thieves" and "Aladdin."

Interested in the Iranian version of Cinderella? Why not give Shirley Climo's The Persian Cinderella a read? 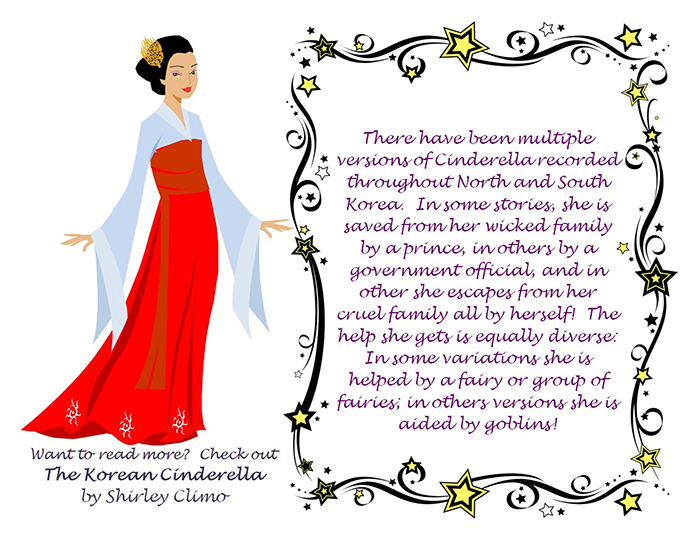 Tokgabis (sometimes spelled "Doggabbis" or "Dokkaebi" frequently appear in Korean folklore. These creatures are sometimes gargoyle-like, but they can also appear as animals or humans. The Tokgabis are trickster spirits that can help or hinder any task - Tokgabis will play tricks on mean-spirited people, but they will help good people with gifts and blessings.

Shirley Climo has written a great version of a Korean tale. Take a look at The Korean Cinderella by following the link! 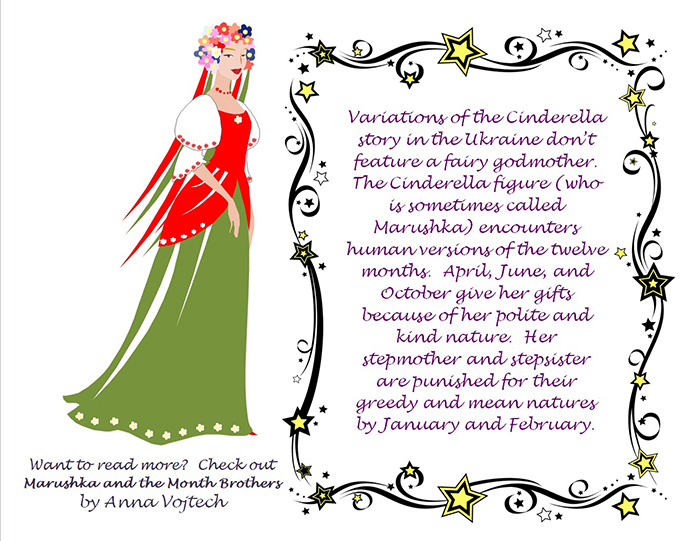 A Slavic version of Cinderella is known throughout the Ukraine, the Czech Republic, Slovakia, Hungary, Romania, and Moldova. The story of Marushka has also been retold and adapted by authors such as Neil Gaiman and Delia Sherman.

Want to read more? Take a look at Philemon Sturges and Anna Vojtech's Marushka and the Month Brothers. 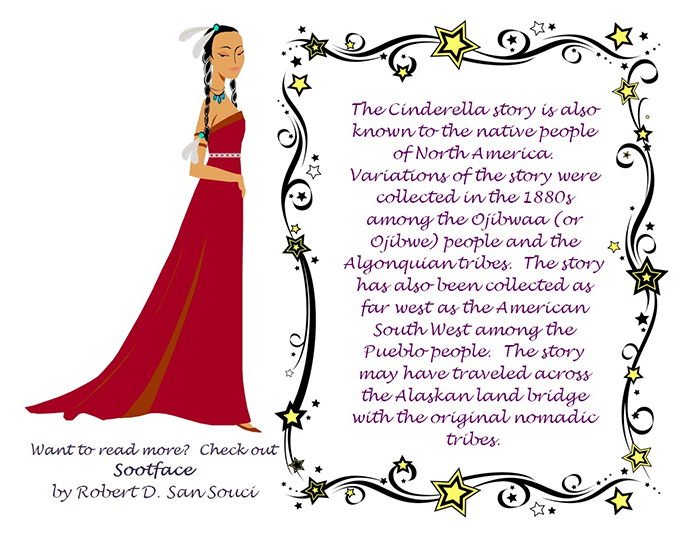 The Ojibwe are one of the largest Native American groups north of Mexico. Their tribes are divided between the United States and Canada and were originally based around Lake Superior. The arrival of the French colonists caused the tribe to move westward into the prairielands of Canada. According to recordings on birch bark scrolls, the Ojibwe came from Asia to North America across the Bering Strait.

Want to read a variation of the Ojibwe tale? Read Sootface by Robert D. San Souci! 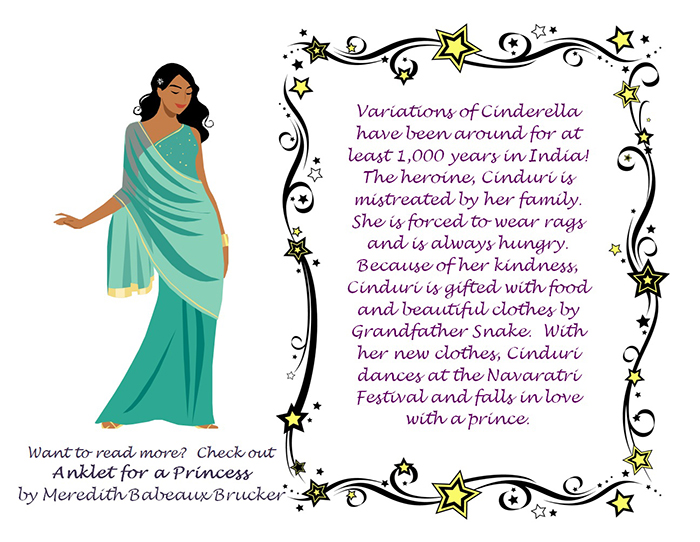 Ancient Indian societies believed that the underwater world was ruled by snakes and dragons. If given offerings, these creatures would provide good luck and wealth. As a result, the snake was seen as a symbol for royalty. Snake venom was also used by Indian physicians for medicinal purposes. As a result, the snake was also viewed as a symbol for strength, wealth, and prosperity.

Interested in reading more about the Indian Cinderella? You should reserve a copy of Anklet for a Princess by Meredith Babeaux Brucker today! 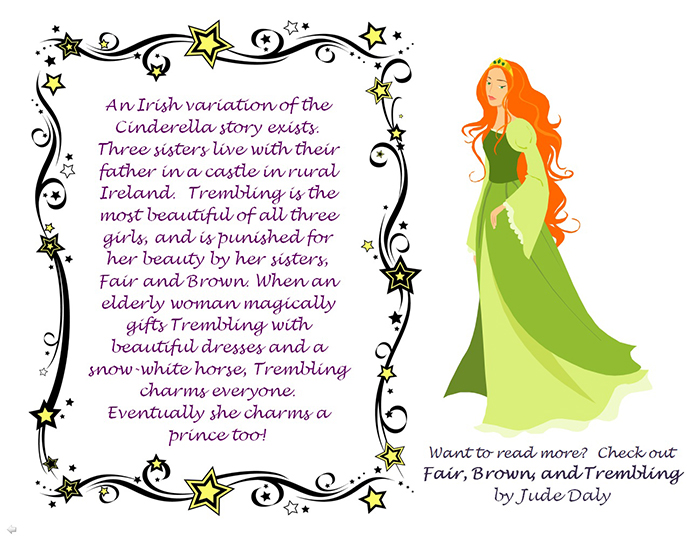 The story of Trembling was first recorded in 1890 in the book Myths and Folk-Lore of Ireland by Jeremiah Curtin. In this original transcription, Trembling's sister pushes her into the ocean after her marriage. While struggling in the water, Trembling is swallowed by a whale and is repeatedly swallowed and vomited back onto the beach. After three days her husband is able to save her. Gross! No wonder Jude Daly edited the children's version! 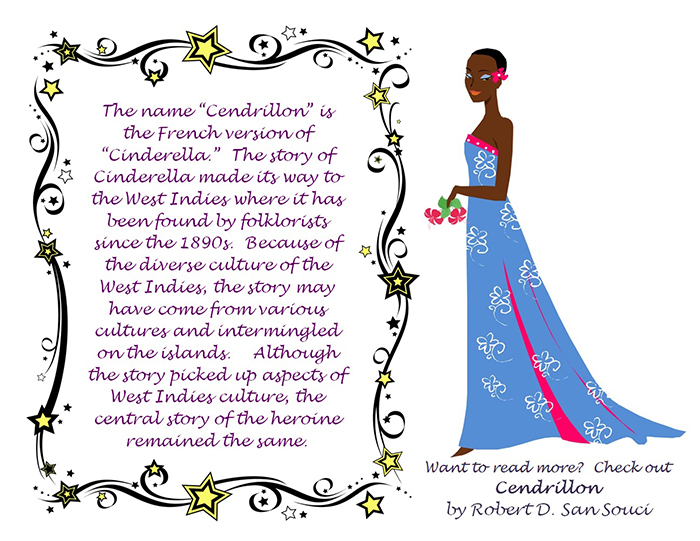 The West Indies are some of the most culturally and ethnically diverse regions in the world. The islands have been populated by people whose ancestry can be traced to Africa, Asia, Europe, and the Americas. This diversity has created unique dialects, musical styles, and religions. This rich mix of culture can be seen in Cendrillon's story.

To read more about Cendrillon, why not check out a copy of Robert D. San Souci's Cendrillon today? 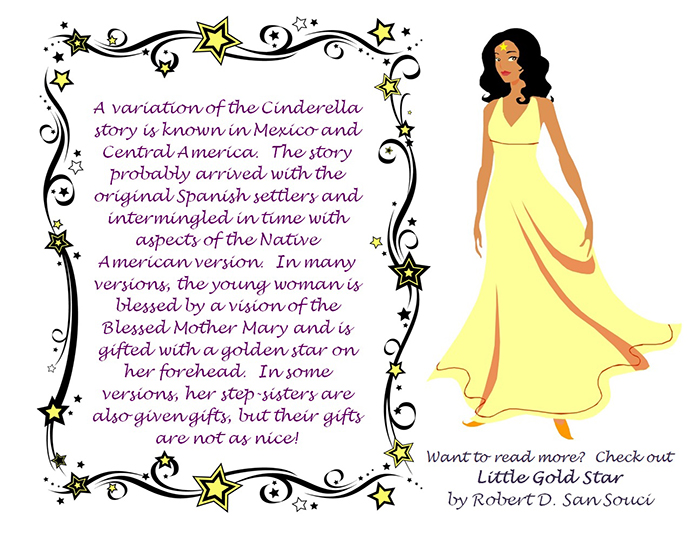 The story of Little Gold Star probably began its life in Spain but has grown deep roots in the American Southwest and in Mexico. Oral variations of the story have been collected and transcribed by folklorists since the 1930s. The translated copy below by San Souci is based on multiple stories collected throughout New Mexico.

Give San Souci's story a try! Find a copy of Little Gold Star at a branch location near you!

At the Wadsworth Library, we examined fourteen different stories that spanned four continents.
10 Comments | Add a Comment
i like this story
frozn - new york
I think that the story from Germany was a little harsh.but other than that I liked the other story's
charly tapia - NC
The germany story was lil r=weird but other one JUST RIGHT IGHT!!
Daevarius
I like the story
Neri Vail
Thanks for the comments! Yes, Charly, the German version (and other versions) can be harsh. It's amazing how much these stories have changed. I'm glad everyone has enjoyed the recommended books!
Chris B. - Free Library of Philadelphia
Because they were born in their home town then they have dresses to become a princess.
rahiym butler
i like the first on because it is 500 years old
alvaro - NC, clinton
This was good information about all of the stories!
Malachi Rosa - clinton
The German story is a little bit to weird for me. Who would like to have to pluck someones eyes out. That is nasty no body would like to see that.😣 That's me if I ever have to go through seeing that, I will not survive that I will barf before I do anything else.
Mason Chalk - North America
I think its the same story but from different country.
David Cardenas - Clinton nc