This Saturday marks the 20th anniversary of the publication of Hellboy and has been designated Hellboy Day across libraries, comic book shops, and bookstores around the world.

Who or what is Hellboy, you ask? Only one of the most unique and interesting "superheroes" to splash onto a comics panel and the world of fiction in some time, as well as being a creator-owned, independent success story from the mind of one Mike Mignola. The universe that Mignola has created is a mashing up of H.P. Lovecraft and Edgar Allan Poe horror fiction, forgotten folklore, and pulp magazine storytelling, with the reanimated corpse of Jack Kirby drawing all the action in a haunted mansion up the hill from a graveyard.

To be more specific though, Hellboy is a lovably gruff demon summoned from Hell to Earth by Nazi occultists during World War II, who is then adopted and raised by Professor Trevor Bruttenholm of the allied forces and grows up to be a large, red-skinned man-thing with a tail, horns (which he files off, leaving circular stumps on his forehead), cloven hooves for feet, and an oversized right hand made of stone that was forged in Hell (a.k.a. "The Right Hand of Doom"!). He also loves cats and has an insatiable appetite for pancakes.

Hellboy works for the United States Bureau for Paranormal Research and Defense (B.P.R.D. for short, which also has its own ever-expanding line of books) with Abe Sapien (man who was transformed into an Icthyo sapien / merman during an occult ritual), Liz Sherman (a woman with pyrokinetic abilities, also the object of Hellboy's undying affection), Johann Kraus (a disembodied ectoplasmic spirit with psychic abilities), and Roger The Homunculus (a humanoid created with earth matter through alchemy), to name just a few of the bureau's agents, fighting against dark and paranormal forces around the globe (and sometimes other dimensions).

Following along so far?

I had pretty much stopped reading comics right around the time Hellboy was introduced to me by my younger brother in 1990-something; it didn't take long for me to get hooked back into that four-color world of wonder, anxiously awaiting that weekly trip to the comic book shop to pick up every new Hellboy adventure. I never would have guessed this weird and wonderful character would still be around 20 years later, spawning two cult movies (Hellboy and Hellboy: The Golden Army, both directed by superfan himself Guillermo del Toro), as well as a couple of animated features (Hellboy Animated: Blood and Iron and Hellboy Animated: Sword of Storms), video games, and firmly planting itself in the canons of pop culture.

But really, the best way to celebrate is to just read some Hellboy, so here's a "Friday Five" of Hellboy story arcs in our collections for fans and novices alike!

Check out our Graphic Novels Explore topic for great booklists full of character(s)—both (super)human and demon—and search our catalog for more great genre supplemental reading, from "horror" and "sci-fi" to "folklore" and "pulp fiction"! 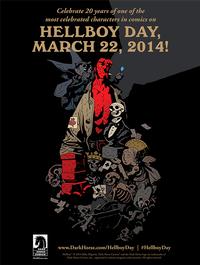