It's new comic book day across the United States today and you can flip through some new comics without even leaving your house to head down to your local comic shop.

Hoopla, one of our most popular Digital Media resources here at Free Library, already boasts a catalog of more than 300,000 movies, TV shows, music albums, and audiobooks. Now they are making a splash (page) with their new selection of downloadable comic books! So far there are almost 600 comics available for download in both single issue and graphic novel formats, including acclaimed titles like Lumberjanes and Locke and Key to cartoons-turned-comics like Adventure Time and Ben 10, from cult characters like Doctor Who and Godzilla to classics like Popeye and the Peanuts gang. Publishers featured so far include IDW, Boom! Studios, Valiant, and Titan Comics, with more publishers being announced in the coming months.

Reading options include ability to read a downloaded title across multiple devices and a feature called "Action View" which enlarges individual comic panels with a double tap for easier reading on mobile devices. Titles are available for 21 days after you borrow them via streaming and downloading (mobile devices only).

Just a quick look through their current digital comic book shop and I've already found one of my favorite characters and collections, The Rocketeer, as well as the comic book series adaptation of John Carpenter's b-movie action sci-fi classic Escape From New York. I know my son is going to be excited when I show him the Fraggle Rock and Kung Fu Panda comics too.

As with all of the Free Library's Digital Media resources, all you need to access all this cool content—for free—is your library card!

What are some of your favorite comics, comic book characters, and series to read?
Do you prefer to read physical comic books or do you like downloading digital versions to your favorite device?
Let us know in the comments! 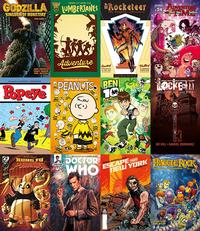 Read Comic Books via Hoopla!
1 Comment | Add a Comment
i whant to take out books and tapes
charles MILLER - PHILA