#FLPNoShameNovember: The Tudors, Too Good

I typically consider myself a “high-brow” reader and viewer. I often read classic literature, watch documentaries, and dig into long-form journalism on current social issues. Heck, I even read Shakespeare. For fun. For real!

But it is actually this last pastime that has also led me down a different road—a road I am finally proud to admit I am on, now that #FLPNoShameNovember has arrived: I love racy retellings of Elizabethan English history. Philippa Gregory’s The Other Boleyn Girl series (which also includes The Queen’s Fool and The Virgin’s Lover, among many others) started me down this path, mining the historic figures and adding gripping layers of deceit and lust to their stories.

This Elizabethan expedition led me to yet another blush-worthy treasure: the Showtime series The Tudors. Running five seasons, this bodice-ripping retelling spans the saga of all six of Henry VIII’s wives. A fully faithful retelling it is not, smushing historical figures together and leaping over some events entirely. But when held up to the latest retooling of the Henry VIII story—a PBS adaptation of Hilary Mantel’s National Book Award-winning Wolf Hall—only one had my blood rushing and allowed me to totally submerge into this deliciously conniving world.

So while I still dig into my literary fare by day—including Hilary Mantel's Wolf Hall follow-up, Bring Up the Bodies, which is truly well done—by night I still sometimes creep off to enjoy the racier sides of the Elizabethan royals. 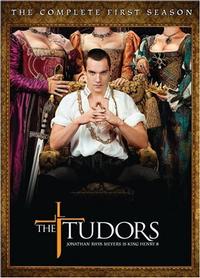 The first season of The Tudors will reel you in to Henry VIII's wiving escapades.
1 Comment | Add a Comment
Have you discovered Reign? The series covers the life of a very young and independent minded Mary Queen of Scotts. Her cousin Queen Elizabeth of England pops up in due course and the viewer has a feast of the noble in-fighting. Heavy on the intrigue!
Tee - CSC