Eventually, once I’ve explained that I don’t care if you read (and that you probably read more than you think—hello, BuzzFeed click bait and Facebook updates) or that no, I haven’t spent much time with either David Foster Wallace or David Mitchell in the last decade, they ask me what I read.  When I say Young Adult and children’s books, I get some strange looks and questions like, “Why don’t you read adult books?” Or “What real books have you read lately?” (Not as many since The Hunger Games has become a crossover phenomenon, but still enough to make me sigh.)

Young Adult books ARE real books! I think it requires WAY more talent to write for teens and children. You have a vast developmental range, and you have to catch brains that are in the middle of the hormonal challenges of puberty as well as navigating the pressures of the classroom, family, and ideas of independence.

What exactly do I like about YA, since I’m technically two decades older than the target audience? I think it’s that things happen.  Since YA fiction (and good nonfiction) has to grab its audience, there is tons of action, all of the feelings, and, you guys—the plot twists! There are very few YA books that are “character studies” or “explorations of cultural dissonance.” These are phrases I read in a lot of “Adult” book reviews that I’ve learned to equate with “nothing happens” or “everything that happens is going to be a total bummer.” How much risk taking or authority questioning do you see in your average 500 page adult novel?  Did the character show growth along her journey, or did she just get divorced and moan about that for 400 pages? How about death? First love? Abuse? The nature of power? Corruption and questioning of the current societal structure? How about all of those in the same novel?

So I tell you proudly, with no shame, that I read Young Adult books. Honestly, there is some fantastic Young Adult fiction being released these days—covering tons of hard hitting topics. Admit it—you loved The Fault in Our Stars by John Green, Divergent totally blew you away with its ending and left you craving the sequel, and, honestly, is anyone not aware of The Hunger Games? It’s okay, fellow adults, to admit we still have feelings, that we love a great story, and that sometimes it’s okay to take a break from being “important” and “serious.”

So next time someone at a cocktail party or a coffee shop starts talking about the most recent New York Times bestseller (that they probably haven’t even read), think to yourself, “I bet my local librarian is reading a really fun teen romance or dystopian right now. I should probably reach out to him or her for a recommendation.”  To guide you on your way into the great wider world of YA fiction, here are some of my favorites from 2015: 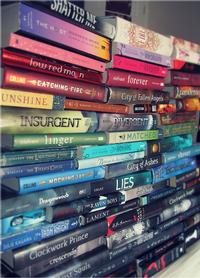 So many YA options!
4 Comments | Add a Comment
As a really grown-up person a YA book (series) I really enjoyed is The Enemy series by Charlie Higson. I could hardly wait for the next book in the series. Still waiting for the last one.
Becky - Dayton, OH
I haven't had a chance to read that series yet but I understand it is awesome. Looks like the final one, The End, will be published in the United States this June. I'm not saying you can get the UK edition on the internet but....
Rachel F - Philadelphia
I really enjoyed Shadowshaper by Daniel Jose Older! It kept me on the edge of my seat for the whole story!
Laura - Philadelphia
Right? Daniel Jose Older really knows how to write a story!
Rachel F - Philadelphia