David Bowie Has Left Us

It's been a few days, but it's still hard to process that David Bowie has left us.

Newspapers, television news broadcasts, the internet as a whole—and more than likely—your social media feed have all been filled with obituaries, remembrances, and mourning for the otherworldly persona known as David Bowie. Whether he was the Starman, Ziggy Stardust, Aladdin Sane, The Thin White Duke, or some new and yet to be unveiled personality, he constantly and consistently changed, influenced, and pioneered all aspects of music, movies, art, fashion, and culture in this world.

In perhaps the finest example of performance art, knowing he was dying, Bowie deliberately created and timed his final album as a parting gift for his fans. The video for the song "Lazarus", off the album Blackstar (incidentally, also the name of a never released Elvis Presley song. As it turns out, both Bowie and Elvis shared the same birthday, so let those cryptic theories commence), was released on his 69th birthday just two days before his death and opens with the lyrics: "Look up here, I'm in Heaven!"

On a more local level, Bowie and Philadelphia were fast friends. He recorded his landmark Young Americans album here, soaking up The Sound of Philadelphia at the legendary Sigma Sound Studios. Then there were the "Bowie Kids", who followed him around town like the Pied Piper. Their tenacity and fandom paid off when Bowie invited them up to the studio to listen to the rough mixes of the album! His terrific Tower Theater shows in July, 1974, during his Diamond Dogs tour were recorded and released as the David Live album, cementing Bowie's connection with Philly fans. A few years later, Bowie would return to narrate and record The Philadelphia Orchestra's adaptation of Peter and the Wolf in 1977. Most recently, local guitar maker Chris Dipinto crafted a guitar for Bowie, glittery "D. B." initials and all.

Personally, I found Bowie through punk rock. Tracing back from some of my favorite bands like Ramones and Stooges, I found they were all influenced by David Bowie. Again, who wasn't influenced by David Bowie?! Once I started digging and listening, I never stopped. There was always something new to listen to, even though I had already listened to his songs hundreds of times.

I could go on, but really what more is there to say that hasn't already been said? I'll just let the music do the proverbial talking at this point. Below is a playlist of some of my personal fav Bowie tunes. His entire catalog is great, so feel free to seek it all out and soak it all in. While you're listening to the music, you can also view this catalog list of Bowie books, music, and movies available from Free Library to further immerse yourself. 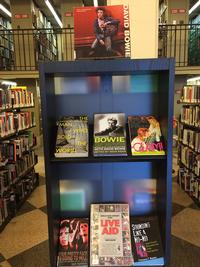 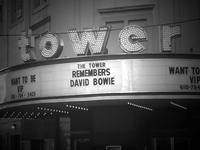 The Tower Theater in Upper Darby, PA remembers David Bowie on their marque after his death.
Add a Comment