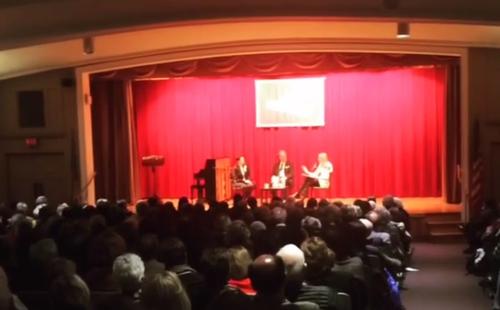 Tuesday marked the official beginning of One Book, One Philadelphia 2016! To kick off the season, Cold Mountain author Charles Frazier and opera composer Jennifer Higdon spoke at Parkway Central Library about their shared love and understanding of the novel’s story, and the intersection of literature and music. Here are some highlights of their conversation.

On translating the book to the opera stage:
Jennifer Higdon said once she started writing, she felt a great responsibility to the characters themselves—to honor Charles Frazier’s wonderful characters appropriately. She said that by the time she began writing the second act, “the characters lived in my head” and guided her writing. She also worked to represent them each musically—Inman, for instance, often has a trumpet and war horns accompanying him, reflecting how the war follows him; Ruby, who is constantly busy working on the farm, has a musical underscore that reflects that.

Higdon also created a new opening scene for the opera. She wanted the ensure the audience immediately felt the tension that surrounds Inman’s journey home—she also wanted a way to surprise the audience right off the bat. So in the first few minutes of the play, the antagonist—Teague, the leader of the Home Guard that seeks out soldiers who desert the army—kills someone. With that, the tone of the piece is set.

To prepare to write the opera adaptation, librettist Gene Scheer and Frazier walked the woods of the Pisgah National Forest, where the real Cold Mountain is located, together. Higdon, however, did not go—she was already so attached to the characters she worried she would be too emotional seeing the grave of the real-life W.P. Inman.

Limitations of page and stage:
Charles Frazier’s descriptions of the setting in Cold Mountain are so precise and poetic that, according to composer Higdon, landscape is almost a character in the book. That was a very difficult element to translate onto a confined stage.

Frazier had a similar experience trying to fit his tome into a theatrical experience when he consulted on the making of the Oscar-winning movie Cold Mountain. After reviewing the script, he felt there was too much focus on the violence, throwing off the balance of the piece. The director, Anthony Minghella, understood Frazier’s point, but noted that unlike the book, the movie could not get longer to achieve a better balance—he was limited to two-and-a-half hours, and even that was pushing it for a major film.

Higdon reflected that, similarly, she had to streamline the story, because it takes three times as long to sing something as it does to say it. She therefore had to be concise in conveying the essential elements of the story.

She and librettist Gene Scheer also had to take some license with the story’s construction. In Frazier’s novel, Inman and Ada spend all but the final 50 pages apart. Scheer commented to Frazier while planning the opera, “We need them to sing together—but they’re never together!”

Making the story sing:
There were many ways, on the other hand, that the opera form could take the story to new heights and reaches. Said Frazier, “Music is such a direct conduit to the emotions—the best I can do with words is approximate.” He was struck by how movingly the music of the opera captures emotions that he struggled to get into words in the book.

Frazier was also moved by getting to see the audience react—laugh, gasp, weep—to his characters and story. As an author, he does not typically get to see as a reader engages with and responds to his story.

The conversation between Frazier and Higdon set the stage for a very exciting, engaging, and thought-provoking eight weeks to come.