The Philadelphia Jazz Project and the Free Library of Philadelphia’s season of concerts celebrating the Great Migration has one more show to go. This is your last chance to catch free live jazz at the library 'til next season. Percussionist and performance artist Kim Pedro headlines the final show, in an already supercharged set, exploring the Great Migration's meaning on modern music in Philly. As usual, librarians see concerts at the library as a pinnacle—the result of musicians studying library resources on music, sheet music, journals on home recording, books on instrument building, DVDs of scale exercises, and other gems.

To reserve your spot at this concert, you can request FREE tickets through the Free Library of Philadelphia's Music Department. To hear recordings, both live originals from Montgomery Auditorium or records from our streaming music services of established jazz classics that some of these musicians are re-imagining, check out previous installments throughout our blog.

Up Next: Kim Pedro
This month’s concert is led by drummer Kim Pedro, who is a visual and performance artist and a builder of community. With the Sun Ra Arkestra’s DM Hotep and under the mentorship of Robert Kenyatta, Kim Pedro founded the JazGuardian Musicians’ Organization. In addition to serving as a performing arts instructor for the Philadelphia Department of Recreation, he’s the originator and prime mover for the artists’ collective NU GRuV Network. Over his career he’s accompanied Monika Herzig, Raimundo Santos, Vanida Gail, Kaligata, King Sound Vibration, Melange, and even a president of the United States.

Recapping Victor North
"I want to thank everyone for coming out and keeping faith in live music after a truly devastating week," was how we greeted the audience the night Victor North played on April 25. Philadephia was already crying purple tears after having lost our beloved Prince, and just the day before, we lost a towering support structure in the city's music architecture: Billy Paul, the Philadelphia Soul icon, who had also left the stage.

Victor, hailing all the way from Alaska, made this migration one of the most unique in the series. Many of his originals had lost-voyage moods of uncertainty, mystery, and confusion. Victor explained how he'd written the opening song in a basement at The University of the Arts in the early '80s. It expressed his frustration back then of trying to break into the Phily scene and getting snubbed. The song was called "The Outsider." Another original, "Now We Know What It Means," was a gray piece searching for justice after Hurricaine Katrina's devastation. Titles such as "Where Are We Going" kept it consistent.

That's not to say the night's mood was locked on mono—Victor found ways to make jokes about everything from his Alaskan heritage to the unsung excellence of the podium onstage.

Adding to that, each member of the trio—Anwar Marshall on drums, Lucas Brown on keys, and Victor—was a blistering soloist.

Anwar favored complex solos that we imagine worked like this: He starts by taking the original number of beats in a phrase, calculating in his head without missing any of them, and then filling solos with as many 32nd notes as the concept of time and reality can hold. Imagine a hummingbird's wings as it sips from a pitcher plant and you'll know what we mean.

And Lucas, even though he held down only one instrument (as far as we could see), synthesized an armada. He handled walking-bass-like tones, melodic horn countermelodies, and many more besides just the one instrument he was sitting at and playing. When this writer told him this after the show, Lucas smiled and said, "Yeah, but I only get paid as one person."

Bring yourself and another person to the last Travelers concert of the season, and view videos of April's performance below: 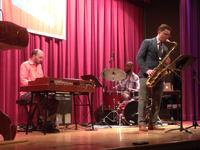