Feeling unlucky? Next week, Chinatown’s own Philadelphia Suns plays us out for the final concert of the New Americans Spring Concert Series this season with an evening of traditional Chinese Lion Dance, which is thought to bring listeners luck and happiness.

We hope you were able to make it to previous concerts in this series, but if not you can read, listen, and watch our recaps from the April and May installments of these newest voices in our Philly community.

Please tell your communities about this event and reserve your free tickets here—we hope to see you there!

Final Concert: Philadelphia Suns
Join the Philadelphia Suns and the Free Library of Philadelphia for a free program of traditional Chinese Lion Dance. Thought to spread luck and happiness, the dance has roots as far back as the Han and T’ang Dynasties.

Dedicated to building Philadelphia’s Asian American community through sports, mentoring, and service, the Philadelphia Suns started in 1972 with just a handful of youths playing basketball in Chinatown. A volunteer, nonprofit organization, the Philadelphia Suns seeks to build character in its members to be positive influences and productive team players in their personal and professional lives.

Recapping TIMBALONA
It all seemed normal at first. While we helped the group raise mic stands and plug in XLR cables to set up, the audience members took their seats and waited patiently for the show to start. The percussion collective had come from places as varied as Argentina (Christian Noguera), Venezuela (Andres Cisnéros), NYC (guest percussionist Nicky Laboy), and the drum circle in West Philly’s Clark Park. If anything, one tell-tale moment could've been before the performance when we watched the band pull a kitchen sink-like array of percussion instruments out of black duffel bags, like so many neon cloths from coat sleeves.

As soon as we welcomed everyone and introduced the band, TIMBALONA kicked right into it: clapping hands, tapping congas, beating cajons, and intoning in Spanish and English. That’s when it happened: A young woman who’d been watching the band near the Information Desk started dancing, moving towards the front of the stage, and then sat down. A young man named Johnathan who’d been taking pictures on his phone danced behind the band, moved to the side aisle, and then took his seat. An audience member named Tony in a Hawaiian shirt stood up and moved his shoulders in a Puerto Rican bomba.

The audience dancing continued, one at a time, in the style made popular by the show that gave Philadelphia Soul Music its most famous calling card. Though we can’t verify if the flash dance members were regular library visitors enchanted by the music, or if this was something more planned, the musical journey through Latin America and the Caribbean left the audience with some rhythmic souvenirs.

You can see more pictures and videos from TIMBALONA on the Music Department’s Facebook page, as well as below:

If you’re looking to read about, play, or explore what the city’s conservatory-quality Music Department has by way of Latin American music, our librarians recommend searching the following subjects in our online catalog:

If you want to listen electronically and want something more in depth or better quality than what you’re used to hearing, we recommend the Library's Contemporary World Music database. One treasure about this database is that it allows you to search for songs by instrument. Since we just had a percussion party, let’s navigate:

Additionally, if you want to look for percussion-heavy albums from only countries in, say, Latin America, you can narrow your results by country in the side menu. Take a listen:

The party ends next week, with traditional Chinese Lion Dance courtesy of Chinatown’s own Philadelphia Suns. We hope you can make it!

The New Americans Committee welcomes and celebrates diverse new voices in the city. 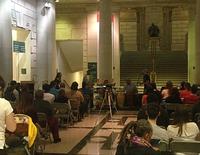