2016 was another great year for readers and fans of comic books, specifically graphic novels. While not necessarily a "Top 10" (especially since I selected sixteen!) and definitely not in any order of importance, the following are just sixteen really cool, fun, entertaining, and thought-provoking graphic novels I read and enjoyed in 2016—all available to check out from the Free Library's collections.

Hellboy in Hell Vol. 2: The Death Card by Mike Mignola
Hellboy is dead—long live Hellboy! In what is the ultimate ending for a character of this magnitude (33 years in the making), Hellboy leaves this mortal plane (but perhaps not comicdom?). Not only does he avenge his own death, but exorcises his own demons, those of his demonic relatives, and comes to except his fallen hero fate. The storytelling and artwork are top-notch, as to be expected from creator Mike Mignola.

The Unbeatable Squirrel Girl Beats Up the Marvel Universe by Ryan North and Erica Henderson
If ever a title was the perfect example of truth in advertising, this would be it. Here's a stand-alone adventure featuring everyone's wisecracking friend to woodland creatures and who can also punch villains through a wall—Squirrel Girl! Our superhero has defeated such baddies as Thanos, Galactus, and Doctor Doom in the past, but she's up against an even weirder villain this time: an evil duplicate of herself! Take a walk on the wild side of the Marvel universe with this fun and wacky read. 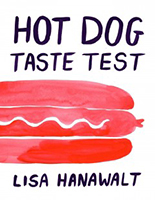 Hot Dog Taste Test by Lisa Hanawalt
Lisa Hanawalt turns her attention towards foodie subculture and absurd comfort food lists in this hilarious collection full of sketchbook doodles (and occasionally doodie), watercolor musings filled with anxiety, and more anthropomorphized creatures than you can seat at a trendy restaurant. I would recommend not eating or drinking anything while reading unless you want to involuntarily do a spit take or choke from laughing too hard.

Tetris: The Games People Play by Box Brown
As I said in a previous blog post a couple of weeks ago, this was one of my favorite reads of this past year. The story has as many moving parts as the puzzle game it is based on, yet is a nice counterpoint to the minimalistic, blocky artwork that illustrates one of the most art vs. commerce struggles to happen during the 20th century. 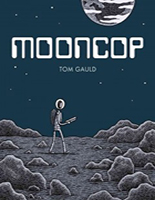 Mooncop by Tom Gauld
Another minimalistic masterpiece that came out this year was Tom Gaul's Mooncop, with its stick-figure pathos for a new space age. This funny and melancholy space un-adventure tears down all our sci-fi utopian dreams and shows us what the mundane day-to-day existence of living in a lunar colony on the moon might really be like.

Meat Cake Bible by Dame Darcy
Beloved underground cartoonist Dame Darcy finally gets the ultimate omnibus treatment in this 400+ page collection of her seminal series Meat Cake. Black and white fever dreams full of neo-Victorian horrific humor and Gothic romance spill forth from every page. Every story from all 17 issues (1993-2008) is here, including her collaboration with grumpy old comics legend Alan Moore.

Chilling Adventures of Sabrina: Book One - The Crucible by Roberto Aguirre-Sacasa and Robert Hack
What if I told you the best current ongoing horror comic on stands and shelves involved characters from the antiquated world of Archie? In one of the few cases where the "reimagining" of old characters for the modern age not only helps buy elevates altogether, Roberto Aguirre-Sacasa and Robert Hack's supernatural suspense take on these campy 60's teens is nothing short of mind-blowing. The fun element is still there, but it's bolstered now with a foreboding and genuinely scary storytelling tone, brought to languid life with Roberto Aguirre-Sacasa's vivid visuals recalling the Eerie and Creepy ink washes prominent in the late 60s and throughout the 70s. Highly recommended! 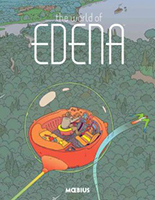 The World of Edena by Moebius
Moebius work—reprinted in beautiful new library editions—and translated into English?! Dark Horse Comics are superheroes here in their own right by getting these stories back in print! In this first installment in a planned on-going series, French comics illustrator and writer Jean Giraud's (perhaps best known for his storyboarding and artwork for science fiction and fantasy films such as Alien, Tron, and Dune) complete World of Edena story arc is presented.The tale of two genderless protagonists, Stel and Atan, who crash land on a planet and stumble onto a camp of interstellar refugees surrounding a mysterious pyramid, is full of beautiful artwork and sublime storytelling.

March: Book Three by John Lewis, Andrew Aydin, and Nate Powell
The conclusion to the multiple award-winning (National Book Award, Eisner Award, and Robert F. Kennedy Book Award) and bestselling (New York Times and Washington Post) trilogy of the Civil Rights Movement, as told from the firsthand account of Congressman John Lewis. As chairman of the Student Nonviolent Coordinating Committee, Lewis guided a nonviolent revolution through persistent direct action, with an army of activists intent to change the world for the better. This book transcends the comics medium, as it also does nonfiction tomes and dusty old history books.

One Week in the Library by W. Maxwell Prince, John Amor, and Frazer Irving
This pick is a no-brainer: stories from books come alive in a library and fantastical things happen! But there's a bit more to it than that—the books on the shelves are actually rebelling. The overall story spans a week's time via one short story for each day of the week, using comic strips, infographics, prose, and poetry to play with the graphic novel medium and narrative.

Hip Hop Family Tree Vol 4.: 1984-1985 by Ed Piskor
In the latest volume of Ed Piskor's illustrated love letter to the world of Hip-Hop, we are introduced to Dr. Dre, Will Smith, Salt-N-Peppa, Rakim, and Biz Markie, to name just a few lyrical luminaries. This book also delves into how Hollywood tried to cash in on the emerging musical genre and lifestyle of Hip-Hop, with the release of films like  Breakin’, Breakin’ 2: Electric Boogaloo, Beat Street, and Krush Groove. For optimal enjoyment, I'd suggest throwing on an old Hip-Hop mix tape (er, ok, I guess Spotify will do too) for the prefect read-along soundtrack.

Batman / Teenage Mutant Ninja Turtles by James Tynion IV and Freddie Williams II
Truly a team-up for the ages (or at least the superhero comics loving kid in all of us), The Dark Knight and those "Heroes on the Half Shell" fight crime side by side in this inter-dimensional adventure. When The Shredder and his ninja followers are transported to Gotham City through a [insert comic booky sci-fi time traveling device here] by Krang, they team up with some of the Caped Crusader's rogue's gallery like Killer Croc and the Penguin to take over the city. Holy Cowabunga!

Moon Girl and Devil Dinosaur Vol. 1: BFF by Amy Reeder, Brandon Montclare, and Natacha Bustos
A refreshingly entertaining, well-drawn all ages comic that doesn't talk down to its audience! Speaking of inter-dimensional portals through time, Devil Dinosaur (a creation of comic book legend Jack "King" Kirby) winds up hurtling through one and landing in New York City. There he runs into Lunella Layfayette (or what the bullies in her school call her: "Moon Girl"), a nine-year-old genius who also happens to have a latent X-gene that could cause her to turn into a monster. Together the two misfits battle humans and inhumans alike, hoping to find the Nightstone that could be the answer to both their problems.

Rolling Blackouts: Dispatches from Turkey, Syria, and Iraq by Sarah Glidden
In this heartfelt and eye-opening travelogue, cartoonist Sarah Glidden travels to the Middle East with two reporter friends to interview refugees about The Iraq War. The graphic journalism here is sympathetic and respectful to its interview subjects and the illustrations display vibrant watercolors instead of the muted, war-torn grays one might expect from a book dealing with this heavy subject. Turn off the 24-hour news cycle and pick up this book for a different perspective on the Middle East and the people who live there.

Bone: Coda by Jeff Smith and Stephen Weiner
Bone is back! In a brand-new adventure featuring Bone, his cousins, and Bartleby the Rat Creature, the crew journey across the desert back toward Boneville as hijinks ensue. Also included here is the complete text of The Bone Companion, fully illustrated for the first time, as well as rare behind the scenes photos & memories of the fan-favorite, all ages comic series.

Troll Bridge by Neil Gaiman and Colleen Doran
It wouldn't be a year-end best-of list without some sort of book from Neil Gaiman. More aptly though, this is an adaptation of an older Gaiman story, one that is itself a reworking of the "Three Billy Goats Gruff" fairy tale. Colleen Doran adapts this supernatural, fairytale-gone-wrong, coming-of-age story that illustrates the (literal) pitfalls and darkness present throughout life, and the fear and uncertainty that occurs when growing up through childhood into adulthood and beyond.

Search our catalog for these titles and to find more great graphic novels from superheroes and comic strips to autobiographical and manga titles as well.

Tell us in the comments what were some of your favorite graphic novels that you read in 2016! Know of a great graphic novel or comics collection we need to acquire? Let us know! 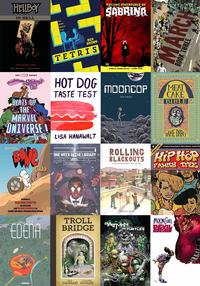