Celebrate 15 Years of One Book, One Philadelphia!

The 2017 One Book, One Philadelphia kickoff event is set for tonight and marks the 15th year of this beloved Philadelphia tradition. Can you believe it?

The very first One Book, One Philadelphia title, The Price of a Child by Lorene Cary, was announced in 2002 with an eight-week period of programs and events running January through March of 2003. Since then, One Book featured selections have always been of outstanding literary quality, with laurels including the National Book Award and the PEN/Faulkner Award, and many on The New York Times Best Seller list. One Book titles have been the inspiration behind films, instrumental musical compositions, an opera, and now, with the selection of The Curious Incident of the Dog in the Night-Time, a theatrical production!

So as we close the door on the reading period and dive into the programming and events surrounding this year’s choice, let’s take a trip down memory lane, shall we?

2004: The Color of Water by James McBride

2005: The Things They Carried by Tim O’Brien

2007: Waiting for Snow in Havana: Confessions of a Cuban Boy by Carlos Eire

2010: The Complete Persepolis by Marjane Satrapi

2011: War Dances and The Absolutely True Diary of a Part-Time Indian by Sherman Alexie

2012: Create Dangerously: The Immigrant Artist at Work by Edwidge Danticat

2013: The Buddha in the Attic by Julie Otsuka

2014: The Yellow Birds by Kevin Powers

2017: The Curious Incident of the Dog in the Night-Time by Mark Haddon

Join us TONIGHT at the Parkway Central Library at 7:30 p.m.! 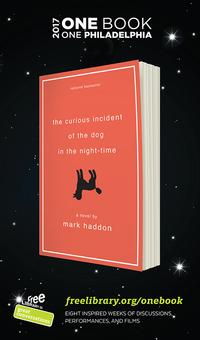 The 2017 One Book, One Philadelphia kickoff event is tonight!
Add a Comment