Man vs. Monster? Kong is King!

The Eighth Wonder of the World roars, stomps, and swings his way into a new film this weekend with Kong: Skull Island, a modern-day retelling of the King Kong mythos and the second installment in a much larger planned cinematic MonsterVerse. Needless to say, my Saturday-Afternoon-Monster-Movie-Double-Creature-Feature-UHF-Watching Inner Child is beyond excited to see the big ape back on the screen!

The plot? A scientific expedition is chartered in 1973 to a faraway land (a.k.a. the fabled "Skull Island"), where ulterior military motives quickly overtake altruistic scientific ones. Once the team discovers / awakens / annoys something (and someone) on the island they shouldn't have, it's fight or flight for survival.

Much like the monster as metaphor that is Godzilla, King Kong is himself not only a metaphor but a perfect parable about the seemingly neverending battle of humans vs. nature. Climate change, deforestation, pollution, the endangering of animal species large and small, and even manifest destiny are all illustrated throughout the many different incarnations of the King Kong story. The subtitle to these movies should just be: Humans—We Never Learn.

Besides the overall deeper themes and meanings throughout these films, they are at their most basic, fantasy flicks of pure popcorn escapism, where monster melees unfurl before your eyes on a 50-foot screen. The modern CGI-ified creature clashes are a far cry from the primitive yet groundbreaking special fx used in the 1933 original film, but both aim to create a world outside of our own where you are not only cheering on a 100-foot ape but are also fully invested in the character's well-being. If anything, that's where the original film's sympathetic storytelling stands out and has made King Kong an everlasting pop culture icon.

If you're looking for a quick refresher on all the Kong-related films out there or want to read some more in-depth analysis, here are some Kong-tastic resources to check out:

You can also find plenty of Kong-related titles in our King (Kong)-sized catalog, as well as previous blog posts about movie monsters! 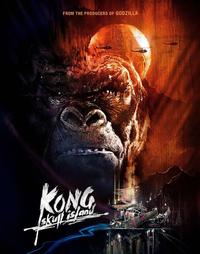 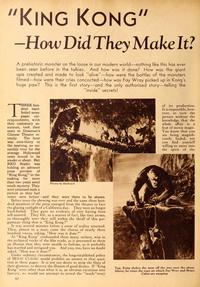 Article from "Movie Classic" magazine (May 1933) titled "King Kong - How Did They Make It", Archive.org
Add a Comment