A History Minute: The Fortunes of Philadelphia - The Engineers

By 1800, Philadelphia was not only the Cradle of Liberty but the center of American manufacturing and innovation. It was the kind of place a young man of vision who was not afraid to get his hands dirty could come and make his fortune. Matthias Baldwin and Thomas Tasker were two such young men. 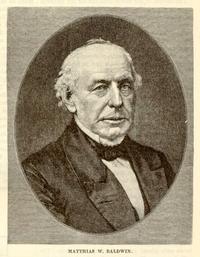 Matthias Baldwin
Have you ever wondered about the statue of a man holding a drawing compass that stands on the north side of City Hall? The man is Matthias Baldwin, one of the great engineers of the 19th century. Baldwin was born in 1795 in Elizabethtown, New Jersey, and was apprenticed to a jeweler in Philadelphia at the age of 16. In 1819, he patented a method for gold plating that became the industry standard. In 1825, he and a partner started a business manufacturing book making equipment and printing machines for the textile industry. As the business grew, the small steam engine that powered his plant proved unreliable and Baldwin designed his own. This inspired him to design steam engines for locomotives.

Baldwin examined designs for English and European steam engines and made improvements, including a steam-tight metal joint that enabled his engines to use steam at double the pressure of others. In 1832, he produced his first locomotive, "Old Ironsides", for the Philadelphia and Germantown Railroad. This was the beginning of the Baldwin Locomotive Works, a 200-acre plant at Broad and Hamilton Streets, which eventually employed 17,000 working round the clock, many of them immigrants from Europe. Baldwin shepherded his business through several economic crises and saw it become the premier locomotive company in the world with sales double that of his nearest competitor. He was a staunch abolitionist who fought to extend the vote to free black men, which led to a Southern boycott of his engines before the Civil War. Baldwin was a founder of the Franklin Institute and also used his wealth to establish a school for African-American children. He died in 1866 and is buried at Laurel Hill Cemetery. 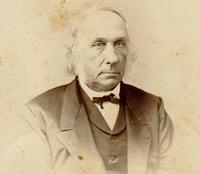 Thomas Tasker
Anyone who has traveled though South Philadelphia is familiar with Tasker Street. It was once the site of Morris, Tasker & Co., a 12-acre factory employing 1600 workers who worked around the clock manufacturing iron goods such as radiators, steam whistles, pipes and fire hydrants. The brain behind this operation was Thomas T. Tasker. Tasker was born in Yorkshire, England in 1799 and arrived in Philadelphia at the age of 20, after completing a 7 year apprenticeship in the copper and ironsmith trades. He worked in stove manufacturing and his mechanical engineering skills enabled him to become a partner in the company, which expanded rapidly into manufacturing tubes for steam locomotives and boilers. In 1842, he received a patent for a fire hydrant. Tasker and his wife, Elizabeth Hickman, lived with their six children at 1502 5th Street, not far the factory. The company also built an iron works in Delaware and had offices in New York and Baltimore.

During the Civil War, Tasker was president of the Citizens Volunteer Hospital at Broad and Washington, which treated over 200,000 soldiers from both sides. When Abraham Lincoln’s body was brought to Philadelphia for viewing on its way to Illinois, Tasker was one of the pallbearers. Tasker spent his later years as a Methodist clergyman and guest preacher. He died in 1892 and is buried in New Castle, Delaware. 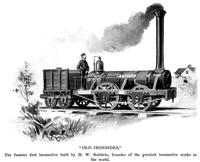 Baldwin's first locomotive, "Old Ironsides", is on display at the Smithsonian in Washington.

Image from History of the Baldwin Locomotive Works, 1831-1913

Morris, Tasker & Co., a 12-acre factory employing 1600 workers who worked around the clock manufacturing iron goods such as radiators, steam whistles, pipes and fire hydrants.
7 Comments | Add a Comment
Very Informative
MARVIN BRYANT - Darby
Enjoyed the enlightenment
MARVIN BRYANT - Darby
Interesting. Thank you for the good information.
Ann Meyers - Art Museum
I grew up in Crum Lynne,across from the BLH shops and office. Was there a statue of Baldwin outside the office?
Jack Howanski - New Hampshire
Thank you for that question, Jack. You have a good memory! According to the Friends of Matthias Baldwin Park the statue of Baldwin that is now at City Hall was originally in front of the Baldwin Locomotive Works at Broad and Spring Garden. It was moved to City Hall in 1921. https://www.baldwinparkphilly.org/matthias-baldwin-history
Sally F. - Philadelphia
Jack, There was a statue of Baldwin at the Eddystone plant, placed there around 1932. It was a copy of the one at City Hall. The Eddystone statue is now inside at the railroad museum in Strasburg, near Lancaster. If you like Baldwinia, here is our latest article on the Friends of Matthias Baldwin website: www.baldwinparkphilly.org/baldwin-locomotive-works
Joe walsh - Matthias Baldwin Park, Philadelphia
I believe Baldwin's first locomotive, Old Ironsides, was destroyed in a landslide. A reproduction was made, as seen in our article on the Preston Retreat, and there is a small model of it in the Franklin Institute, but I don't believe it is in the Smithsonian as the caption of the first image states. If someone knows otherwise, please let me know, as I would love to see it. Www.baldwinparkphilly.org
Joe walsh - Baldwin Park, philadelphia