Overbrook gets its name from a train station built over a brook. This is quite appropriate, as it was the Pennsylvania Railroad that bought trolley rights to Lancaster Avenue from 52nd Street to Paoli in 1876 and began development in this part of Philadelphia.

In the 19th century, country living was for farmers and the wealthy who could afford to build rural retreats in addition to their city mansions. The development of horse-drawn trolleys made it possible for well-to-do middle class families to escape a city full of factories and crowded with immigrants who came to work in them. Developers followed the trolley lines and built spacious homes with amenities like gas and eventually electricity. Overbrook, at the western edge of the city, became a desirable place to live.

By 1899, the Overbrook Station had 64 trains a day, running every half hour.

Many of the new homes in Overbrook were rowhouses, but they were larger than those in the rest of the city. Developers also built "twins", semi-detached houses which were larger still. Then, in the 1890s, Drexel & Company joined the Pennsylvania Railroad in purchasing the John M. George Farm, a 165 acre tract near the Main Line. This became Overbrook Farms, a planned community of free-standing homes designed by famous architects like Horace Trumbauer, and costing up to $35,000 (equivalent to $1 million+ today). Overbrook Farms Club controlled the development and is the oldest continuously operating neighborhood association in the U.S.

Overbrook Farms had its own central steam heat plant, one of the first in the country, as well as its own electric light plant. Water was pumped from four wells into a reservoir.

Overbrook High School was built in 1924 and is now on the National Register of Historic Places, but its graduates are more famous than its building. At least 11 Overbrook graduates have played in the NBA, including Wilt Chamberlain and Walt Hazzard. Other famous graduates include Will Smith, actor, rapper and producer, Jon Drummond, Olympic track gold-medalist, Willie L. Williams, former police commissioner of Philadelphia and Los Angeles, Bill Cash, Baseball Hall of Famer, and Catherine Pugh, Mayor of Baltimore.

The African Episcopal Church of St. Thomas at Overbrook and Lancaster Avenues is home to the oldest Aftrican Episcopal congregation in America. It was established in 1792 by Richard Allen and Absalom Jones, who became the first Episcopal priest of African-American descent.

Overbrook is also home to the Overbrook School for the Blind, originally the Pennsylvania Institution for the Instruction of the Blind, the first school for the blind in America. Julius Friedlander opened this school at 20th and Race Streets in 1833. It moved to its present location at 6333 Malvern Ave. in 1899. 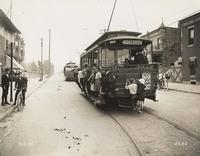 Overbrook Trolley (from the Free Library's Print and Picture Collection) 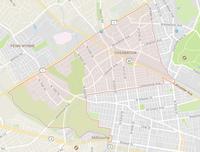 Overbrook School for the Blind
9 Comments | Add a Comment
I really like these short articles about the history of Philadelphia neighborhoods. i enjoyed this article and the olney article. Good job! I am interested in West Oak Lane, East Oak Lane, Cedarbrook/Stenton-Wadsworth, Northwest (Germantown. Mount Airy, Chestnut Hill, East Falls, Manayunk, Rox), eastwick, Kingsessing, hunting park, fairhill, south philly. I JUST LOVE PHILADELPHIA i wish philly libraries were more community focused: neighborhood history displays inside library, mailing out event schedules and info about programs to residents, neighborhood history lectures,
Daf - Northwest Philadelphia
Although an interesting and informative article overall, the failure to include Dr. Guion S. Bluford in your list of famous graduates from Overbrook High School demonstrates a lack of basic research and is a glaring omission. As a public library, you had an opportunity to educate people about the accomplishments of a notable African American aerospace engineer who served as a NASA astronaut and was the first African American to fly to space. It's unfortunate that athletes and entertainers are frequently highlighted in society while notable educators, engineers, and scientists are overlooked...pun not intended.
Eagle - West Philadelphia
Thanks, Daf! Events as well as a brief neighborhood history are included on the page for each FLP branch in the Locations section of our website: libwww.freelibrary.org/locations/
Sally F. - Philadelphia
Thank you, Eagle, for pointing that out. Dr. Bluford deserves more than just a mention and I will do some research for a future post about him. In the meantime curious readers may find the basic facts in our Knowledge Base under Philadelphia FAQs>African Americans.
Sally F. - Philadelphia
I always wanted to know some of the history about the area. I would like to know more about the home that are built in the area. The twin on 64th street. Some pictures would be nice.
Kevin - Overtook Philadelphia
Thank you for your interest, Kevin. You should take a look at the book Overbrook Farms: https://know.freelibrary.org/Record/2287497. It is an ebook available for immediate access through Hoopla once you log in with your library card. You will find additional photos at the Print and Picture Collection at Parkway Central Library: https://libwww.freelibrary.org/locations/departments/print-and-picture-collection
Sally F. - Philadelphia
The Pennsylvania Railroad bought the railroad from Edward Hestonville who was across the Brook railroad next to Overbrook. As with you not mentioning Dr. Bluford; one fails to mention the PA railroads history of how it became into existence. We disagree with your article; challenge on.
Sheila Buchanan - Philadelphia
We have pictures proving that Hestonville (East of Overbrook) was sold to the Pennsylvania Railroad. Hestonville was one of the 1st Villages and train stations leading west on the Conestoga Trail; thus passing through Overbrook (Over the Brook of water). Leading from the waterfront aka Philadelphia post office at 30th Street Station where the ships would dock to bring in goods down at the water and then traveled back West; So glad we/I came across this article, don't write about history without doing your research. Buchanan
Sheila Buchanan - Philadelphia
Interesting my neighborhood history!
theodora ashby - Overbrook Park