In 2013, NSA contractor Edward Snowden shook the pillars of the worldwide intelligence community when he revealed a trove of highly classified information that exposed astonishingly widespread mass U.S. surveillance overreach on a variety of international and domestic levels. Labeled a hero by some and whistleblower by others, he was formally charged with espionage and has been granted asylum in Russia, where he lives in an undisclosed location. In this special interview, Snowden will discuss these revelations and the current status of the surveillance state via a closed-circuit link to the library with Jeremy Scahill, investigative journalist, co-founder of the online journal The Intercept, and author of the bestselling books Blackwater, Dirty Wars, and The Assassination Complex.

Here are some questions we’d like to try to answer about this poignant Author Events fall kickoff.

So what does Snowden himself say?
In an episode of the HBO series Vice, he lays out what’s at stake and who can track you, listen to you, hack you, and surveil you. "Every part of private life today is found on someone’s phone."  Surprising, important, scary information.

Why is the Free Library hosting this event?
In the era of surveillance that the post-9/11 era ushered in, it’s important that we examine our intelligence programs in light of past failures and examine where we’ve gone since then.

Isn’t Edward Snowden a controversial figure to host at a public library?
We know not everyone agrees with Snowden’s actions. In an interview with Larry King, former Vice President Dick Cheney says, "I think he’s a traitor. I think he’s done enormous damage to the country." He also has a much different view on the NSA and just how much this surveillance affects Americans.

Our goal at the Free Library is to foster valuable dialogue about the issues Snowden’s actions have raised. Here’s a bit more from investigative journalist Jeremy Scahill, wherein he discusses Snowden, our values, and the very specific dangers of domestic spying.

Just how important does Snowden think all this is? Is he prepared to face the consequences of his actions?

Edward Snowden will speak with Jeremy Scahill on Monday, September 11, 2017, 7:30 p.m. at Parkway Central Library via a live, closed-circuit broadcast. In this one-of-a-kind interview, Snowden will discuss the current status of the surveillance state. 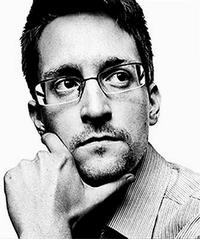 Edward Snowden
7 Comments | Add a Comment
Will this be captioned for the Deaf?
Chris Springer Cowden - Philadelphia
We will not caption the event but if you attend and require an ASL interpreter we will be happy to provide one.
Andy Kahan - Philadelphia
how much is the snowden event
don cragg - phila
Auditorium tickets are now SOLD OUT. In-House Simulcast Tickets are still available for $15 https://libwww.freelibrary.org/programs/authorevents/?id=68139
Web Admin - Philadelphia
Will the video be viewable online after the event?
Diana Prince - Philly
Will the Edward Snowden video be viewable after the event?
Roland Ott - Philadelphia
I hope you are well, Ed. Will the cool iPhone case you're working on for journalists be available to the general public?
Jennifer - Virginia