Earlier this week, Librarian of Congress Dr. Carla Hayden made a whirlwind visit to the Rosenbach and the Parkway Central Library, and we couldn't have been more thrilled to have her! 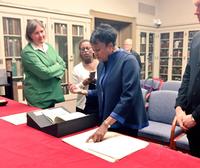 On her tour, she was able to view a selection of the special rare books housed at each institution, including the original manuscript of Ulysses as well as the only surviving copy of Benjamin Franklin’s first Poor Richard’s Almanac at the Rosenbach.

A special surprise was the opportunity for Dr. Hayden to 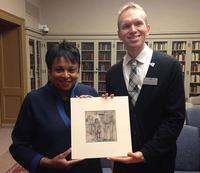 see a typescript of her favorite childhood book, Bright April, in the Free Library's Rare Book Department. Curator Christopher Brown of the Children’s Literature Research Collection (CLRC) pulled an original drawing from the book as well as photos of the author, Marguerite de Angeli, from her visit to the Free Library in 1965.

Dr. Hayden sat in on a conversation about the civic engagement initiatives underway around the system when she stopped by a meeting of the Library Cluster Leaders. Siobhan Reardon, President and Director of the Free Library, escorted Dr. Hayden throughout the day, showing her our innovative Culinary Literacy Center as well as the construction site where new public spaces will soon rise at Parkway Central Library. She even made a stop at the new Corridor of Culture exhibition, which celebrates the 100th anniversary of the Benjamin Franklin Parkway.

Dr. Hayden assumed her role as the 14th Librarian of Congress on September 14, 2016, and is both the first woman and the first African-American to hold the post. She is also the first professional librarian to hold that position in over 60 years, having served from 1993 to 2016 at the Enoch Pratt Free Library in Baltimore and as president of the American Library Association (ALA).

We hope she’ll stop by the Free Library again soon!

Photos courtesy of Library of Congress

Dr. Carla Hadyen visiting our Culinary Literacy Center
1 Comment | Add a Comment
Dr. Hayden, so very glad you visit the Parkway Central Library and it so wonderful for the City of Philadelphia to receive a Librarian of Congress from our nations Capital Washington D.C. As a frequent visitor to the Library over the past several years, I am impressed and elated at the learning processes that can be accessed the Library. Thank you so much and lots of luck. Hugo
Hugo V. Presentado - Philadelphia