Book clubs seem to be more popular than ever—we've even got two right here at the Free Library: our annual One Book, One Philadelphia reading selection creates citywide conversations every year and the recent debut of our Online Winter Reading Challenge is poised to keep area readers busy no matter how much snow blankets the city.

If that's not enough, want to join one of the most far-out literary events this side of Mars? What better time than during Philly Loves Bowie Week, running now through January 14, to join the David Bowie Book Club?!

Musing on Twitter at the end of December 2017, Bowie's filmmaker son Duncan Jones stated, "My dad was a beast of a reader. One of his true loves was Peter Ackroyd’s sojourns into the history of Britain & its cities. I’ve been feeling a building sense of duty to go on the same literary marathon in tribute to dad. Time allowing... #Read-ItBig’nsTheBrain". Later that same day, he invited others to read along with him during the month of January and to begin discussing Akroyd's Hawksmoor starting Febrary 1. 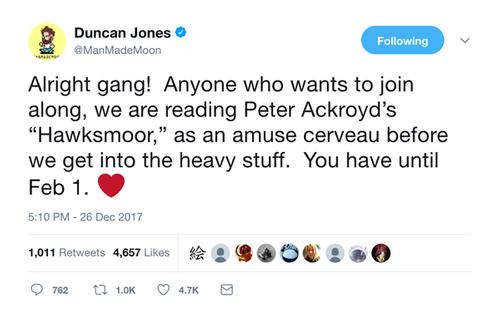 Not surprisingly, the book began to trend online as people tried to find copies to read (sadly, the Free Library does not have a copy, but you can look online and find various formats to read, some for free.)

It's been almost two years since David Bowie rocketed off this mortal coil but his passion for life and all forms of art are still influencing and inspiring us. As eccentric as his artistic output was,  his taste in literature was just as voracious and varied. Bowie's booklist spans fiction, nonfiction, history, poetry, comic books, and some that probably defy classification. Books by authors such as Richard Wright, Yukio Mishima, Angela Carter, and John Kennedy Toole are stacked up in the bookstacks alongside titles from George Orwell, Susan Jacoby, Junot Díaz, and even Dante and Homer.

You can browse a selection of some of Bowie's favorite books available from our catalog or view the full booklist at his official website.

How many of the books listed have you already read? Are there any you would want to add to your own to-read list? Let us know in the comments! 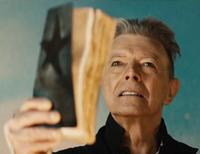 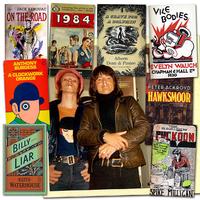 David Bowie sporting a Clockwork Orange T-shirt (the book by Anthony Burgess is in the list) with his old chum, George Underwood. Photo from David Bowie's official website. 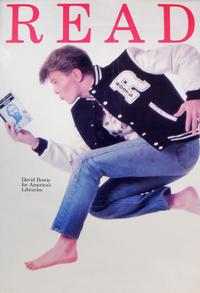 David Bowie promotional poster for American Library Association's (ALA) READ campaign, 1987
5 Comments | Add a Comment
I'm totally interested and would love to join. My home town is Philly.
Loreen MacConnell - Fontana Ca
As a young teenager I discovered David's music and I have been a dedicated fan since. I have been so very fortunate to have met David many times over the years. Every encounter was amazing, but the one that was the most special is when David invited myself and a handful of other devotees into Sigma Sound Studios, in 1974, while he was in Philadelphia recording Young Americans. David has played an extremely important role in my life and I will be forever grateful to him. I look forward to reading the books that David read. It is yet another beautiful way to keep his spirit with us always. xo #phillylovesbowie
Marla Kanevsky - New Jersey
Love to join , fan of David Bowie since first hearing Ziggy album my brother had. Brad LaVanture
Brad LaVanture - Delaware County
Im a great big fan of David bowie and i would realy love to join this group
Liat Kessler - Tel Aviv Israel
I am a huge David Bowie fan. I do not have a whole lot of spare time but I would love to join this club. I could use the push to get back into reading. I miss reading.
Megan Barbieri - Bensalem, PA