How do we dream ourselves out of this?

It’s 1968, 50 years ago. This is what August, a young girl freshly uprooted from her rural Tennessee home, now living in the Bushwick section of Brooklyn, asks herself as she stares at the cover of Life magazine. Wide eyes in the hunger-hollowed faces of two other black children look back at her.

August never lived. Not in the sense that you and I do. She’s the protagonist of a novel, Another Brooklyn by Jacqueline Woodson, the featured selection of 2018’s One Book, One Philadelphia program. Yet what she wants to know—how to dream oneself away—must be a question asked in one way or another by so many other black women and men who are, and have been, as real as any of us.

We work, of course. We act. We fight. We read. We listen to the legacies of what we know. Many historians mark 1968 as one of the United States’ most turbulent and pivotal. The Vietnam War raged, and with it, protests. The Civil Rights Act was passed. But first, riots swept through American cities as people reeled from the shock, sadness, and anger at Martin Luther King Jr.’s assassination.

In 1868, a century before King’s death—and 1818, a sesquicentennial before—W.E.B. Du Bois and Frederick Douglass were born. Both spent time in Philadelphia, an epicenter of abolitionist activism and thriving black communities.

How do we dream ourselves out of this? Whether from behind a podium, a desk, or the bars of a prison cell, these men may have asked themselves this question.

They worked, acted, fought, read. They learned, like the thousands of unsung women and men who walked before them, alongside them, whose names we have only heard vaguely of, or whose names are lost to history. Just like August, a brown girl dreaming who never lived—not in the sense that you and I do. Yet somehow her story touches, speaks to, and underscores our own. Black History Month belongs to Martin Luther King, it belongs to W.E.B. Du Bois, it belongs to Frederick Douglass, it belongs to the millions of names we hardly know or never will. Just as it belongs to August, to author Jacqueline Woodson. As it belongs to me, to you. To all of us. We do wise to learn from legacy. 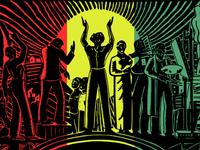