#OneBookWednesday: In the Author’s Words

At the beginning of Jacqueline Woodson’s recent event at the Community College of Philadelphia, she told the roomful of eager students: "Put down the phone and experience me."

For those of you who haven’t experienced her yet this season during her visits to Philly, here are some highlights of her talk.

On writing about her home neighborhood, Bushwick:
All characters in a story go through a metamorphosis, and so too does Bushwick, which she considers the "fifth girl" to the foursome of August, Sylvia, Gigi, and Angela. Woodson watched Bushwick undergo a metamorphosis in the 1970s during White Flight, and again more recently: What was predominantly a black and Latino working class neighborhood has now been "discovered" by wealthier white people. "Really, they’re Columbusing," says Woodson, laying claim to a place as Christopher Columbus did. In writing Another Brooklyn, she wanted people to know “whose steps we’re walking in.”

On how Another Brooklyn should be read:
She wrote the story of Bushwick, then laid on top of it the story of four girls. On top of that, she laid poetry and white space. The white space means something, she says—to pause, to go back and reread the previous moment; and that a moment is now over. "It’s a short book, but it’s meant to be read slowly."

When told about a debate over whether August should be seen as successful at the end of the book, she argued for yes. "August has a deep sadness, yes, but a lot of people do. She is also accomplished, and out there finding her ‘other Brooklyn’, just as she set out to do." She emphasized that August isn’t lost, to her—her search for who she is is just part of her journey.

On how she came to writing:
She lied a lot as a child, and a teacher finally told her, "Instead of lying, write it down—then it becomes fiction." She found that when she put it on the page, it could live somewhere between the lie and truth.

She also read a lot as a child, and she always felt she was looking for herself on the page: "Where is Jacqueline Woodson in all these stories?" She wants her readers to see themselves in her books. Likewise, growing up in a joint Quaker–Nation of Islam household, she felt she didn’t ever see Nation of Islam in what she read, save for The Autobiography of Malcolm X. That became part of the impetus for including a storyline about NOI in Another Brooklyn.

On tips for budding writers:
Don’t get too carried away trying to pack a ton into each paragraph, each page, each chapter: "You’ve got the whole book to tell the story!" She advises to go moment by moment with your characters, "and be in each moment with them."

She also said, "There’s no such thing as writer’s block—it’s FEAR." She spoke of how writers often self-censor, listening to voices in their heads telling them they’re not legitimate. She urged the audience to overcome those voices. To combat her own writing fear, before writing anything she tells herself, "NO ONE is going to see this."

Woodson is sharing her insights and wisdom with Philadelphian teens over the next few days. To hear more, you can catch her at Lucien E. Blackwell West Philadelphia Regional Library on Tuesday, March 13—for which you can submit your own questions online—or at the One Book Grand Finale on Wednesday, March 14, when she will be in conversation with 6ABC’s Tamala Edwards at the Parkway Central Library. 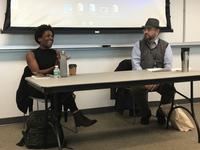