Now on view at the Rosenbach, Of Two Minds: Creative Couples in Art & History showcases the creations of romantic couples who inspired, instructed, or even assisted one another in making art or knowledge. In honor of Women's History Month this March, we shine the spotlight on two remarkable women who were artists, partners, and educators in an era when it was unusual for women to hold prominence in the public art sphere.

Violet Oakley was a muralist and stained glass artist, public art domains that have typically been dominated by men. If you've visited the Pennsylvania State Capitol Building in Harrisburg, you've seen her work: in 1902, she was commissioned to paint 43 murals for the state's brand new Capitol building. Oakley's style was well-suited to the Capitol's Beaux-Arts architecture and neoclassical elegance: her paintings favor bold lines, vivid colors, and dramatic compositions that allude to Renaissance art. At the time of the mural commission, Oakley shared a communal household with several other female art students. This was an unconventional arrangement at the turn of the twentieth century, and garnered both positive and negative attention—one of their instructors, the celebrated illustrator Howard Pyle, called them the Red Rose Girls after their property—but the young artists shared a home for nearly a decade, and each found a substantial measure of success as artists and illustrators.

Some years later, Violet Oakley taught a mural painting class at the Pennsylvania Academy of the Fine Arts—she was only the second female instructor to ever teach at PAFA—and captivated a young art student named Edith Emerson. Perhaps inspired by this course, Emerson was commissioned in 1918 to paint murals for the new Little Theatre (now known as the Plays & Players Theatre, the Rosenbach's near neighbor on Delancey Street); Emerson won a prize from PAFA for her murals as well as the admiration of her instructor, Violet Oakley. Emerson became Oakley's assistant; later, they moved in together and lived as companions for nearly 40 years. During that time, Emerson became a curator and then director of the Woodmere Art Museum in Chestnut Hill, which recently hosted an exhibition of Violet Oakley's artistic career.

Oakley and Emerson are remarkable figures in women's history, landing prominent commissions and roles in art education when there weren't too many examples of female success in the art world. But the artworks on display in Of Two Minds, on loan from the Free Library's Print and Picture Collection, don't capture their importance in Philadelphia history or turn-of-the-century American art; rather, these drawings seem to offer a glimpse into the quiet, peaceful moments of their shared life.

An undated sketch by Oakley at first seems to bear little resemblance to her vivid historical murals. But the longer you look, the more the sketch seems to reveal: the onions are tall and stretch toward the cloud-dotted sky, suggesting a slightly overgrown garden; Emerson seated, comfortable, her knees supporting her own drawing; the relaxed folds of her clothing, sketched in bold lines like a draped figure in historical painting, flow into an article of clothing cast on the ground—perhaps it was a warm day? In a few lines, Oakley has captured what appears to be a moment of both artists at work in a pleasant domestic space.

In Emerson's drawing, fine lines trace the curve of Oakley's hair and careful smudges create the folds of her clothes and shadows on her face. Despite the humble materials, the pencil-drawn frame and block lettering gives this drawing a more permanent feeling, like a grand portrait; Oakley's unlined face, tilted downward, has the grave expression sometimes given to artistic representations of angels. This drawing is also undated, although it was signed by the artist in 1981 before it was gifted to the Print and Picture Collection; perhaps, to its creator, it came to represent a memorial to Oakley, who died in 1961. But both the peacefulness of the subject's pose and its rendering in light, fine pencil create the impression of a quiet moment captured and made beautiful.

These two drawings will be on view at the Rosenbach through October 7; in the current exhibition, you can learn a little more about the lives of Emerson and Oakley, as well as other artists and writers who lived and worked together. But even after the exhibition closes, the century-old artwork of Emerson and Oakley will remain in some of Philadelphia and Harrisburg's lovely historical buildings. Should you pass by, take a moment to reflect on the lives and achievements of these Philadelphia art mavens. 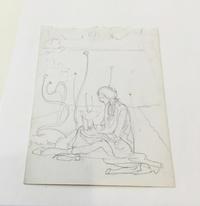 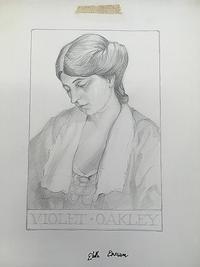