The Print and Picture Collection recently added a group of photos to the Historical Images of Philadelphia Digital Collection featuring intrepid reporter Vivian Shirley climbing three Philadelphia landmarks between 1929 and 1930: the Drake Hotel, Tacony-Palmyra Bridge, and Federal Reserve Bank. The photos live in a folder labeled "Shirley, Vivian" in the Print and Picture Collection’s Philadelphiana Collection, just between "Ships, Shipbuilding, and Shipyards" and "Shops and Stores." When we saw the photos, we knew we had to share them. Our own intrepid volunteer Debby created digital records for the images, recording as much metadata as we could discover, before the photos were sent to our Collection Care Department for scanning. Debby researched the life of Vivian Shirley and shared what she found in the records. 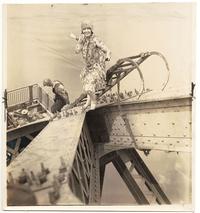 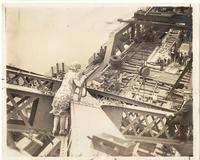 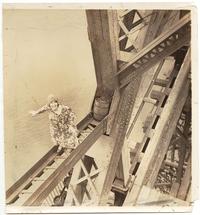 Vivian Shirley climbing and driving a rivet into the Tacony-Palmyra Bridge (under construction), 6/28/1929

Born Elizabeth Malcolm in Lynchburg, Virginia in 1898, this "stunt reporter" went by the name of Vivian Shirley when reporting for Philadelphia’s Evening Public Ledger, from the late-1920s until 1933. Her student degrees from Longwood University (Farmville, Virginia) and the University of South Carolina prepared her for an academic and literary career. Malcolm taught and published poetry for a time. She became popular for her adventurous reporting in the Ledger, willing to try anything to make a story interesting. It should be noted that in 1932, Shirley’s stunts were curtailed by the Ledger due to concerns that they endangered the paper’s insurance. Shortly thereafter, in 1933, she married her editor, Harry Nason. They moved to New York, where he became an editor for the New York Post, and she freelanced and did radio spots for a decade or so. Shirley died in 1987, at the age of 89, her name appearing in an obituary as Vivian Hinternhoff.

The Print and Picture Collection's Philadelphiana Collection contains over 20,000 prints, drawings, scrapbooks, watercolors, and photographs which constitute a picture history of Philadelphia from its founding by William Penn to the present day. We are currently working on creating a subject list finding aid for our Philadelphiana collection.To learn more about materials in the Print and Picture Collection, visit our information page at freelibrary.org/pix or email us at erefpix@freelibrary.org. 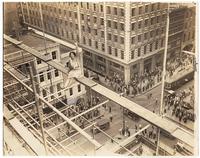 Vivian Shirley sitting on scaffolding atop the Federal Reserve Bank (under construction), 6/14/1930 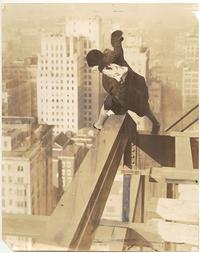 Vivian Shirley on top of the Drake Hotel (under construction), 1/29/1929
2 Comments | Add a Comment
This is wonderful! And having access to the finding aid in progress is incredibly useful, thank you Laura!
Alina - Philadelphia
What a daredevil! I'd buy the paper to read her stories!
Andrew Davis - Philadelphia