A History Minute | The Armstrong Association and The Berean Enterprise

The last decades of the 19th century produced a backlash that diminished much of the progress made by blacks in the south after emancipation and led large numbers to travel to the manufacturing centers of the north in search of a better life. Like thousands of European immigrants, many headed for Philadelphia, but they were not entirely welcome.

Factories refused to hire blacks as skilled workers, regardless of their training or experience, and the majority were forced to work as unskilled laborers or domestics for low wages. Unskilled workers had trouble finding work at all. Most landlords refused to rent to blacks, forcing them into crowded, substandard housing in a few specific neighborhoods. In addition, native black Philadelphians, many of them well educated and successful, saw the newcomers as a threat to their hard-won respectability and acceptance by the white community.

Some black Philadelphians had a better vision. They believed economic success would lead to political power and they started organizations to provide job training, business education, and a path to home ownership. Two of the most successful operated well into the 20th century and became part of other organizations that continue to serve the African American community.

The Berean Enterprises
Matthew Anderson (1845-1928) was born in Greenfield, PA and arrived in Philadelphia in 1879 as the first African American to graduate from Yale Theological Seminary. In 1880, he established the Berean Presbyterian Church to serve the black community and ultimately raised $28,000 for the construction of the church building (at what is now 19th & Girard) despite no help at all from the Philadelphia Presbytery. In 1899, W.E.B. DuBois described the church in his book The Philadelphia Negro: "Probably no church in the city, except the Episcopal Church of the Crucifixion, is doing so much for the betterment of the Negro..." Anderson believed his community would gain respect by helping themselves rather than depending on charity or the government.

Moved by his congregation’s desperate need for safe, clean housing, Anderson established Berean Building and Loan in 1888, with the help of community leaders such as William Still, noted abolitionist and black business leader, and John McGill, a white mill owner. A building and loan differed from a bank in that it was owned by its depositors. Berean depositors were required to deposit $1 every week for 11-1/2 years, a total of $138. At the end of that period the depositor could withdraw $200, which represented 8% interest compounded annually. Deposited funds were used to provide home mortgages to members of the community. Mortaged properties were not just single-family homes. Many were purchased as boarding houses and about 25% of the mortgages were held by black women. Mortgages did not make it possible for blacks to buy homes in white neighborhoods, but it did improve the quality of the housing in the black communities and offered black workers an opportunity for investment. Berean Building and Loan was in business until 2003, when it was acquired by Advance Bank.

In 1899, Anderson founded The Berean School, a trade school for African Americans. Classes were held at night from 7:45 p.m. to 10:00 p.m. to serve a working population from the city and surrounding communities. Students could learn carpentry, upholstery, millinery, sewing, tailoring, electricity, typewriting and stenography, bookkeeping, cooking and waiting, as well as basic reading, writing and arithmetic. Anderson acquired several lots adjacent to the church, built the school, and equipped it with the latest machinery. This school, later named The Berean Institute, served the community until 2017, when it was purchased by Philadelphia Technician Training Institute, which offers classes in manufacturing automation, auto repair, and welding at the original Girard Avenue location.

Like the Berean Institute, The Armstrong Association focused on economic success as a route to greater equality, but it took a data-driven philanthropic approach. The group studied black employment and living conditions and determined it could best help by finding better employment for the newcomers and helping the public schools provide suitable vocational training. The organization’s Industrial Secretary, Alfred L. Manly, advocated for migrants and placed them in jobs previously only held by whites. The organization also placed a home and school visitor at four elementary schools that served the black community. Abigail Richardson served these students by visiting homes and following up on truancy and discipline problems. She set up a recreation center for the children, who were not allowed in the city’s recreation centers, and a social club for mothers to learn sewing and needlework.

The Association continued to study living and working conditions in the African American migrant community and share its findings with other organizations and city offices. It’s publications included The Movement for the Betterment of the Negro in Philadelphia (1910), A Comparative Study of the Occupations and Wages of the Children of Working Age in the Potter and Durham Schools Philadelphia (1913) and The Negro in Business in Philadelphia (1916). Richard Wright left the association in 1909 to work with the African American Episcopal Church, where he later became a bishop. He continued to believe in the value of data, as shown by his publication of The Philadelphia Colored Directory in 1910. In 1957, The Armstrong Association of Philadelphia affiliated with the National Urban League and became the Urban League of Philadelphia. 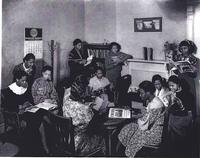 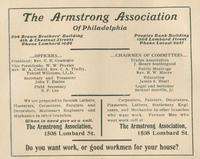 Ad for the Armstrong Association employment office (source: The Philadelphia Colored Directory)
1 Comment | Add a Comment
Hi Sally, thanks again for a wonderful article. The Parkway Central Library holds an incredible amount of primary resources for those interested in Philadelphia history. In addition to some of the titles already available as digital facsimiles online, you'll find several more publications in our catalog by the Armstrong Association of Philadelphia not yet digitized. These include a set of annual reports ranging from 1911 to 1921: a real treasure trove of materials on this important organization not easily found together elsewhere! One of them, the 1914 report, can be seen as part of the Philadelphia - Changing City exhibit now on display on the 3rd floor until April 13th. The rest of the Armstrong Association annual reports have been part of a series of Hands-on History free public tours associated with the exhibit. You can stop by the Art Department tomorrow, February 16th to see them on such a tour starting at 4pm. As soon as the exhibit is over anyone will be able to easily access them and use them in the library once again.
Alina - Philadelphia