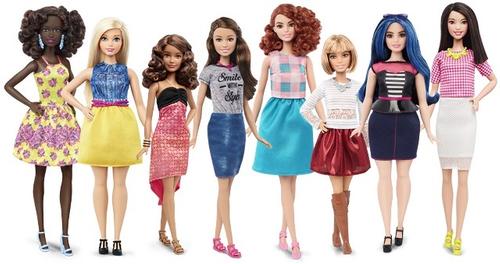 The Barbie doll’s official beau has always been Ken, but to many toy collectors (and some cultural critics) the real natural counterpart to Barbie has always been G.I. Joe. The two playthings, created within five years of each other, ushered in a new era in the way children play with – and the way adults regard – toys. There are hundreds of books, movies, CDs, records, and audiobooks in our collection devoted to the "teenage fashion model" who debuted in 1959 and has become a play staple of nearly four generations of American kids.

In honor of Barbie’s 60th (and G.I Joe’s 55th) birthday, let’s take a closer look at how these plastic creations have changed the world...

Barbie may have the Dream House, the pink convertible, a fabulous and multivaried career (her resume includes stints as a veterinarian, optometrist, paleontologist, NASCAR driver, cheerleader, President, sign language interpreter, and even a beekeeper), the undying love of her beau Ken, and the support of a bevy of best girlfriends, but Barbara Millicent “Barbie” Rogers—that’s her full legal name—owes it all to her "parents" Ruth Handler, the high-powered CEO of Mattel Toys, and Jack Ryan, a former missile engineer and toy designer.

Handler was a shrewd "my-way-or-the-highway" businesswoman who had keen insights into what children enjoyed in toys, as well as what they found lacking. She observed how her own daughter loved paper dolls, but much preferred the fashion model cutouts from comic books rather than the little girl dolls intended for kids her age, as well as her daughter’s major frustration over the tabbed clothes never staying on. 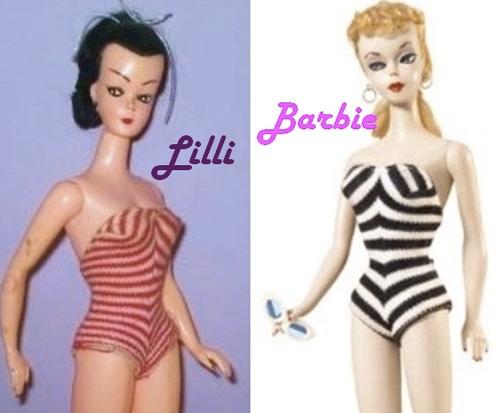 While on a fortuitous family trip to Europe, Handler’s daughter (who was also nicknamed Barbie) became entranced with the Lilli doll. This hard plastic doll, with very womanly proportions and a saucy blond ponytail, was a novelty based on the German comic strip character of the same name. Readers of the Lilli comic would know the doll wasn’t intended for kids (let’s just say that generous gentlemen kept Lilli in all the Dream Houses she needed) but naïve little Barbie Handler just wanted the doll. (Another lightbulb went on in Ruth Handler’s head when she learned that, while the Lilli doll came in several outfits, additional doll clothes were not sold separately.)

Handler bought a Lilli doll and took it to Jack Ryan, with orders to improve it. Ryan smoothed out the doll’s more naturalistic details, made her limbs poseable and waist bendable, and molded the doll in a new, more flesh-like plastic called PVC. She also insisted that Barbie’s sold-separately wardrobe be made from fashion-quality fabric, with real zippers, buttons, and buckles. The original prototype, as unveiled at the 1959 Toy Fair, had some of the flinty-eyed gold-digger look of the original Lilli, but by 1967 she’d become the wide-eyed sunny blonde that catapulted Mattel into the $4.8 billion company it is today. 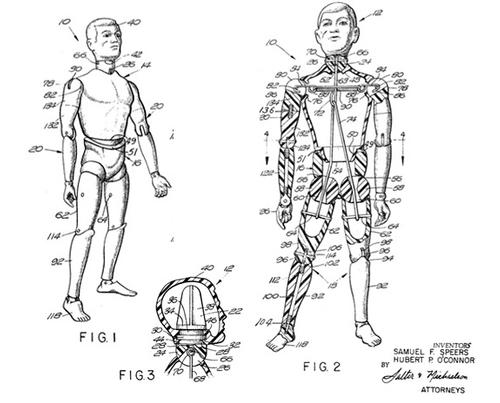 Meanwhile, rival toy company Hasbro was scrambling to come out with a similarly blockbuster doll, something that could also create a never-ending market for accesories like Barbie did. Hasbro executive Don Levine had a brainstorm the day he passed by an art supply store and saw a wooden ball-and-socket figure reference mannequin in the window. Hasbro executives liked the idea of a toy soldier that had the same poseable wrists, hips, shoulders, and knees as a human being, but how were they going to sell a doll to boys? That's when Hasbro invented the term "action figure".

The doll was a hit in the early '60s, but G.I. Joe's popularity waned in the Vietnam era, when militaristic toys were looked upon with suspicion as grooming a new generation of cannon fodder. Hasbro tried to rebrand Joe as a freelance adventurer with a beard and "kung fu grip", but it didn't work. The original Barbie-sized Joe was discontinued by 1978. By the Reagan '80s, Joe's militaristic bent wasn’t as offensive to parents, and Hasbro revived the brand as 3.75 inch plastic action figures who fought a fictional war against the evil forces of COBRA. (Why so small? It was a combination of following the popularity of Star Wars action figures, plus the OPEC crisis had made the cost of plastic skyrocket.)  The revamped figures and storyline were so beloved with the Saturday Morning Cartoon generation that it spawned a live-action movie franchise.

But this very quality of being an ultra-feminine or ultra-masculine archetype has gotten both dolls into trouble—Barbie especially. Her impossible 32-16-29 figure has long been blamed for inspiring eating disorders, and if she were a real woman she would have half a liver, shortened intestines, contracted Achilles tendons, and wrists too fragile to lift anything. (And there is the example of Ukranian model Valeria Lukyanova, who has had surgery to resemble a real life Barbie doll and who says she eats only liquid vegetable shakes to maintain her weight.) For the record (as explained by current Barbie Vice President of Design Kim Culmone), Barbie's waist is so small because you can shrink a dress pattern, but you can’t shrink the size of the threads in a piece of fabric, and unless the doll has a nipped in waist its clothes won’t fit like they do on a person, or be easy enough for a child to dress and undress. (They've also kept Barbie's figure the same for decades so moms can hand down the Barbie clothes they had as a child to their own kids.)

There's also Mattel's lawsuit against the Europop group Aqua for their song "Barbie Girl", claiming the song defamed Barbie as a vapid bimbo (Mattel lost the case), and the uproar over the kid's book Barbie: I Can Be a Computer Engineer, in which a blundering Barbie crashes her computer and can't complete her video game project until two men come do it for her. Mattel apologized and took the book out of print, but not before it inspired dozens of satirical remixes, including one from University of Colorado information science professor Casey Fiesler, who redid the book so that Barbie writes infinite loops in Python, weathers internet trolls who doubt she's the real programmer, and declares "You can't let sexism stop you from pursuing science!" The whole affair was reminiscent of a 1993 culture-jamming prank in which a group identifying itself as "The Barbie Liberation Organization" covertly switched the voiceboxes in talking Barbie and G.I. Joe dolls in toy stores, so that G.I. Joe giggled "Let's plan our dream wedding!" and Barbie barked out "Vengeance is mine!!!" Nowadays, in keeping with their slogan "Designed to Inspire", Mattel has made a bigger emphasis on Barbie being available in all skin colors, hair textures, body shapes, and abilities, and has even made a Stars n' Stripes military Barbie. (When G.I Joe becomes a beekeeper, that's when we’ll know the toys have reached gender parity. And as G.I. Joe always said, “Knowing is half the battle.”) 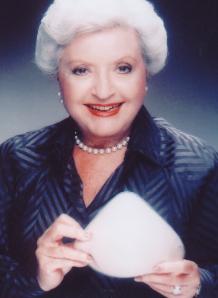 One last thing about Ruth Handler: years after creating Barbie, she was diagnosed with breast cancer. She had a radical mastectomy, but quickly found out all the breast prostheses currently on the market were unsatisfactory—partly because no manufacturer noticed that, like shoes, they needed to come in left and right shapes. Inspired, she founded Nearly Me, a company providing prostheses, lingerie, and post-surgical garments for other breast cancer survivors.

Love Barbie or hate her, Ruth Handler's genius was in creating products that helped women navigate the way their bodies change, from little girls contemplating puberty to women regaining their self-esteem after surgery. You can read more about her incredible life in Barbie and Ruth:The Story of the World's Most Famous Doll and the Woman who Created Her.

Did you have a favorite Barbie doll? Or G.I. Joe? Or other beloved toy from childhood? Drop it in the comments below! 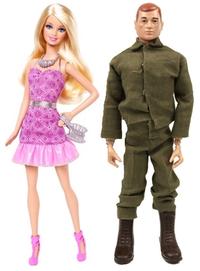 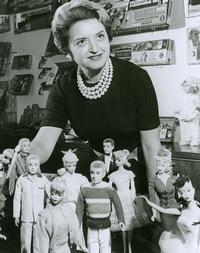