May Day! Mayday? May Day!

What do you think of when you hear the words "May Day"?

(And no, I don’t mean the distress call "mayday," which comes from m’aidir, French for "help me"—and is, interestingly, entirely unrelated to the holiday!)

Although it’s uniformly celebrated on May 1, May Day holds many different meanings. For centuries, various European cultures have recognized it as the long-awaited return of spring, marked by maypole dancing and seasonal festivities. Others see it as a religious holiday: since at least the 1700s, Catholics have set May Day aside to honor Mary, the most venerated female figure in their faith.

More widely practiced than either of these fêtes, however, is the observation of May Day as International Workers’ Day. In the 1880s, labor unions in the United States were fighting to regulate the length of the working day to a standard eight hours, in order to combat the practice of employers demanding shifts of 10, 12, or even 16 hours from their employees. (Today’s 40-hour work week is the direct result of this campaign.) On May 1, 1886, strikes and rallies were held throughout the country to promote this effort; in Chicago, it set off a series of events known as the Haymarket affair, in which peaceful protesters, civilians, and police were killed and four anarchist labor leaders were murdered by the state. In commemoration of the Haymarket affair and the struggle for workers’ rights, the nascent socialist movement chose May 1 as International Workers’ Day in 1891.

Why, though, is International Workers’ Day not particularly present in the United States, if it memorializes events that occurred in Chicago? A push to create a public holiday honoring the labor movement had begun in the United States well before the Haymarket affair; by the late 1880s, a number of states were already celebrating Labor Day in September, as we do today. When the opportunity came to set a federally observed date, President Grover Cleveland resisted associating the United States with global pro-labor organizations, preferring the genteel connotations of the September date to the politically charged May Day. On 1894, Labor Day was nationally cemented as occurring on the first Monday in September.

This May Day, you can find a plethora of ways to celebrate at the Free Library. 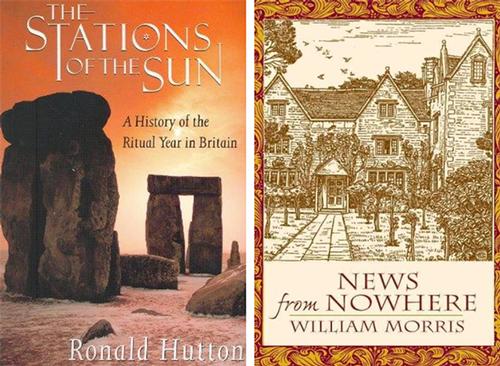 Read about ancient seasonal rituals in the British Isles or enjoy an e-book edition of News from Nowhere, a novel by the 19th-century artist William Morris that envisions England as a post-wage-labor utopia. 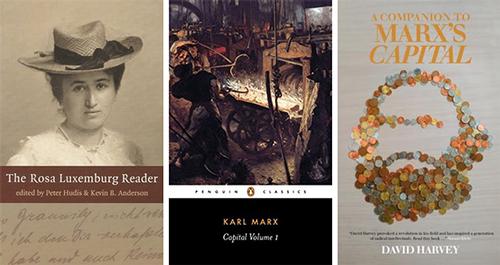 Dive deeper into socialist and communist political thought with The Rosa Luxemburg Reader or the first volume of Karl Marx’s Capital (Intimidated? Don’t be! The library has many great resources for first-time readers of Marx, such as David Harvey’s A Companion to Marx’s “Capital”). 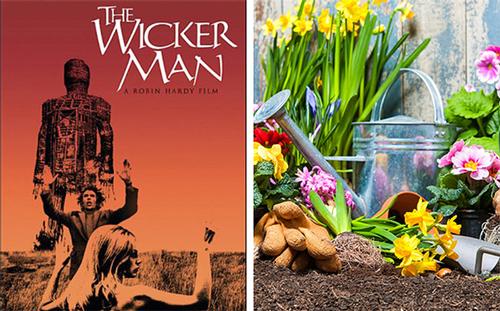 Check out a DVD of The Wicker Man, a 1973 horror film featuring Christopher Lee that features a truly terrifying May Day ritual, or reference these lists of gardening resources compiled by our librarians to bring spring to your own patch of dirt.

How will you recognize May Day this year? Share your favorite traditions below.

Children perform a ribbon dance around a maypole in Barwick-in-Elmet, England, c. 2011.

A depiction of one of the events of the Haymarket affair, published in Harper’s Weekly in May 1886. 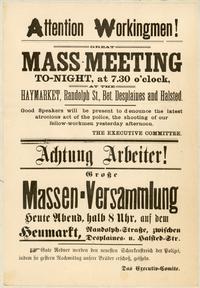 A protest flier from the Haymarket affair, 1886.
Add a Comment