A History Minute | Fortunes of Philadelphia: Planes, Trains, and Automobiles – The Story of Budd Manufacturing

"Stronger, lighter, safer" was the goal Edward Budd pursued his entire life. Along the way he built the largest manufacturing company in Philadelphia and forever changed the way the world travels. 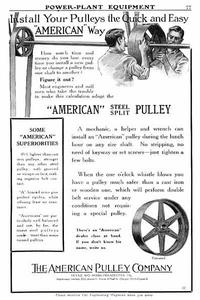 was born in 1870 and grew up in rural Delaware, a descendant of the very first Quakers who followed William Penn to the New World. After graduating high school, Budd came to Philadelphia as an apprentice machinist, took night classes in drafting and engineering at the Franklin Institute and the University of Pennsylvania, as well as completing correspondence courses in science in his spare time. At that time, all factories used pulleys made of wood and cast iron to transfer power from steam engines to machinery. When Budd’s friend, Thomas Corscaden patented a pulley made of pressed steel, he hired Budd to figure out how to manufacture the pulley, resulting in the American Pulley Co. being born. Within a few years, their pulleys were in use through the world and dominated industry until the 1920s.

Budd saw a future for pressed steel far greater than pulleys. In 1902, he moved to Hale & Killburn, a major producer of railroad and trolley furniture. Railroad cars and trolleys were built of wood and cast iron and still resembled the trains of the Victorian Age. Budd designed railroad car seats made of pressed steel that were cheaper to produce, lighter in weight, and stronger than the old seats. Introduced in 1904, these seats became the industry standard for over 30 years. Budd went on to engineer all-steel passenger cars for the Pullman Company. Budd left to start the Edward Budd Manufacturing Co. in 1911. He took Joseph V. Ledwinka with him, an Austrian immigrant who was a wizard with sheet metal. They set up shop in Kensington in a small rented building with a circus tent outside to cover the large stamping machine. Budd and Ledwinka set their sights on replacing wood auto bodies with welded all-metal bodies. But first they had to design and build equipment to roll and weld the steel in the shapes they needed, something no one else had done. It took three years and a brush with bankruptcy before the newly–formed Dodge Brothers Company ordered 5,000 units of the new metal car bodies. Dodge increased its order to 50,000 bodies the following year and soon became the third-largest auto-maker in the US. By 1916, Budd Manufacturing was producing 5,000 auto bodies a day in its new plant in Nicetown.

Aside from Dodge, steel auto bodies were a hard sell in the U.S. Ford and GM stuck with the traditional wooden bodies built by carriage makers. After World War I, Budd turned to Europe and soon had licensing agreements with Citroen, Morris, Fiat, Peugeot and Volvo to manufacture steel auto bodies using his methods. Budd’s work with Andre Citroen inspired him to develop the "monopiece" body in which the body and chassis of the car were combined into a single unit much stronger and lighter than anything in use. Budd made a film to show the difference. He put some ordinary cars on top of a cliff near his factory and pushed them off the edge. At the bottom there were piles of scrap. When his new car was pushed off it rolled down in one piece and at the bottom a driver got in and drove it away. Budd believed his new auto body was so important to the industry that he released all of the patents involved in its construction to the American market without charge. By 1933, almost all US cars were made of steel using Budd’s techniques.

The Great Depression decimated the car business and Budd was forced to lay off half of his workforce. In an effort to keep the business going, he turned to a new corrosion-resistant metal. Developed in Germany, stainless steel was only used for small items but Budd decided it would be perfect for airplanes. He just needed a way to weld large sheets of the new metal. Budd turned to Earl Ragsdale, a resourceful engineer who had joined the company after WWI. It took 3 years and the invention of the "shotweld" process, but in 1932 the Budd BB1 Pioneer began 17,000 miles of demonstration flights throughout the US and Europe. The plane did not take off commercially speaking, but since 1935 it has been on display in all its shining silver glory outside the Franklin Institute. 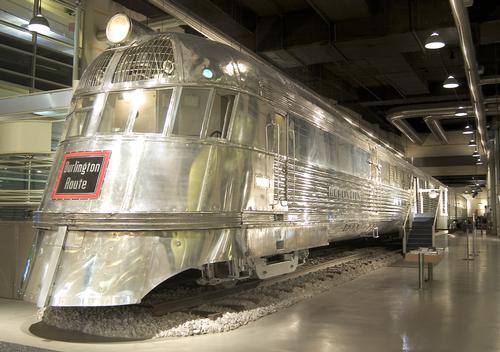 Meanwhile, Budd Manufacturing used its new knowledge of stainless steel fabrication to produce ship components for the U.S. Navy and Edward Budd returned to the railroad business. He and his engineers developed a new stainless steel diesel-electric train they called the "Zephyr." In order to keep his workers employed, Budd sold these at cost to the US railroads. The first Zephyr rolled out of the plant in April of 1934 to begin a series of demonstrations all over the country. It broke world speed records, appeared in a Hollywood movie, and captured the imagination of the public. By 1935, all the workers who had been laid off were back on the job and passenger train ridership was up 103%. Budd Manufacturing didn’t even need to retool for World War II. It just shifted production to tanks, armored trains, jeeps, airplane bodies, and specialty vehicles. By 1942, Budd employed 20,000 workers, many of them women.

When Edward Budd died on November 30, 1946, his company owned hundreds of patents on manufacturing processes developed by himself, Ledwinka, and Ragsdale. His factories covered over 4,000,000 square feet in Philadelphia, Bustleton, and Detroit, and employed thousands, many of them second and third generation.

Budd’s son, Edward G. Budd, Jr., took over the company and continued to expand, first as a Korean War military contractor and then as a producer of subway cars and the developer of the first disc brakes for automobiles. It was around the time of Edward Budd, Jr.’s death in 1971 that the company began its long downward slide. Affordable air travel had replaced passenger trains and foreign cars flooded the American market.

In 1978, Budd Manufacturing was sold to Thyssen-Krupp Automotive, a German owned company with US operations in Detroit. Manufacturing was gradually shifted from the Philadelphia plant until its closure in 2003. Plymouth Group, a New York company with experience in developing sites in the Bronx, purchased the 1.8 million square foot  property in January, 2019. Budd’s factory is no more, but Edward G. Budd is honored in the Automotive Hall of Fame in Dearborn, Michigan.

Vanishing Philadelphia: Ruins of the Quaker City by J.P. Webster

Edward G. Budd
3 Comments | Add a Comment
How can we reinvent our car industry or manufacturing, bringing jobs back to America
Bridgette Tinnin - Philadelphia
I am familiar with the Budd Company and really enjoyed reading the article. Three generations of my family were employed here. My Grandfather & Grandmother, who worked side by side, on the same 'B' shift for (4) four decades. My Dad also retired from the company, being a Master Welder. Two of my uncles were employees, too. A college buddy of mine was also a machinist, like Mr. Budd, himself. I rode on the local subway cars, every day to high school. I was proud to know there built locally and my family had some things to do with that!
Alphonso Dandridge - Philadelphia
I was an apprentice toolmaker at the Hunting Park plant from 1967-71. Best thing I ever did! It really helped with my later career and life. I had 2 Uncles and 2 brothers in law that worked there over the years. Great memories...
Stan Glab - Sayre