These are the foundational principles underlying asset-based community development (ABCD), a positive-minded approach for thinking about the place a community calls home. Rather than focusing on deficiencies, ABCD urges residents to make their neighborhood’s strengths visible and leverage them toward community-driven growth.

It’s also the philosophy behind the Paschalville Partnership’s Community Catalyst Initiative, a two-year effort led by the Free Library of Philadelphia in the community served by the Paschalville Library at 70th Street and Woodland Avenue. The Paschalville Partnership is a collaboration of 11 community-based and city organizations that has been working for the past six years to transform library services for Southwest Philadelphia residents, especially for job seekers coming to the library. This new venture, begun late last year, is being funded in part by the Institute of Museum and Library Services, whose Community Catalyst Initiative is encouraging institutions across the country to transform how they engage with their communities.

"Thanks to the Community Catalyst Initiative, the Partnership has been able to bring residents into the fold and engage with them in a very authentic way that puts them in charge. It’s helping to build lasting relationships," said Andrea Lemoins, the Free Library’s community organizer for its southwest locations, including Paschalville Library and five other libraries in Southwest Philadelphia.

A team of resident consultants is guiding the overall project, advising project partners on how best to reach out to the community and find key audiences, such as neighbors with strong connections and business owners who are community-minded. Residents are also serving as neighborhood ambassadors, whose job is to conduct one-to-one conversations with residents across the community.

Says Diane Poulson-Venn, a neighborhood ambassador for the initiative since January: "It’s been an enlightening and rewarding experience, getting to speak to people about what they feel should come to the community, rather than being told."

The Partnership is also hosting story circles around particular themes, another way to identify community strengths. A recent story circle featured residents whose neighbors nominated them for going above and beyond by doing great things in the community. The next story circle, in late October, will bring together service members in honor of Veterans Day. The Partnership is also convening community-based groups and organizations for a series of community chats, including a recent meeting with block captains. Visits to local businesses that are deeply identified with the community are similarly part of the initiative’s agenda; Fred’s Water Ice was their first stop. 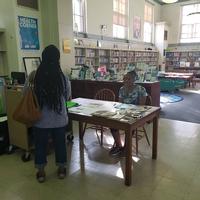 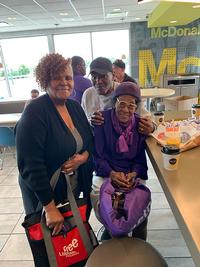 Diane Poulson-Venn, left, a Neighborhood Ambassador, attended “Coffee with Cops,” hosted monthly by the 12th Police District at the neighborhood McDonald’s. There, she talked with Rev. Paul Moore and Mrs. Featherstone, both long-time Southwest Philadelphia residents and activists. 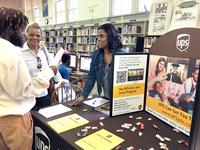