The human toll exacted by the Civil War is made clear simply by the size and number of hospitals in Philadelphia that treated the casualties of war. It’s no exaggeration to say that a few were industrial in scale.

As the second-largest city in the country at that time—as well as a maritime and rail hub for the Union, and with close proximity to major battle lines—it's little wonder that Philadelphia was a leader in treating the wounded, sick, and dying. In his 1913, richly-detailed and comprehensive work concerning Philadelphia’s role during the Civil War, Frank H. Taylor wrote in Philadelphia In the Civil War: 1861-1865 that there were up to 24 military hospitals in the city. Satterlee and Mower U.S. General Hospitals were the largest with 2,860 and 4,000-bed capacities, respectively. The latter, with its hub-and-spoke configuration, was so large, in fact, as to have an internal network of tracks for transporting patients, food, and supplies.

Notable, too, is the Citizens’ Volunteer Hospital located at Broad and Washington which served as a patient reception center and clearinghouse. Though it only housed 400 beds, it was strategically situated at a depot of the Philadelphia, Wilmington, & Baltimore Railroad. The most seriously injured and sick were treated there, while most were transferred to other hospitals in the city. Taylor wrote, as well, that Summit House Hospital in West Philadelphia became dedicated to the care of African American soldiers when 1200 of their numbers landed at Greys Ferry on August 24, 1864. He further notes that due to segregation, the white patients there were then transferred to Satterlee.

Taylor wrote of the city, that "out of the experience gained in the army hospitals of Philadelphia many patriotic young physicians developed the skill and knowledge which has tended to make this community famous as a center of medical and surgical education." This is arguably as true today as it was 1913.

Learn much, much more about this topic when Carole Adrienne, writer and producer of the forthcoming PBS documentary Civil War Medicine, appears at the Free Library on Tuesday, November 12 at 7:00 p.m. in the Skyline Room at Parkway Central Library.

Registration is free for this event » 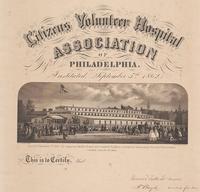