I’ve been called a walking disaster many times, and frankly, there's a lot of truth to it. I spill things, drop things, say things, and eat things I shouldn’t. But I’m nothing compared to a misadventure on the open ocean. I know all about how much havoc those sea disasters wreak, because as someone who reads interesting nonfiction, maritime disaster books are some of my favorites. They’re like the true crime books I also crave, except a maritime disaster is no whodunit: Mother Nature is always the perp.

That I love curling up with a cup of tea and a harrowing tale of a ship succumbing to her watery grave isn’t something I like to admit, but in the spirit of resurrecting #FLPNoShameNovember—that beloved former series of Free Library stories about the books we love reading but loathe admitting to—I’ll share a trio of my favorite titles. Into the Raging Sea, The Perfect Storm, and In the Heart of the Sea detail infamous commercial ship catastrophes. 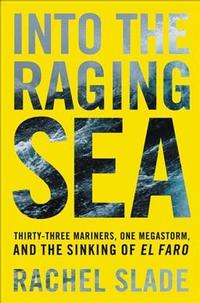 Into the Raging Sea: Thirty-Three Mariners, One Megastorm, and the Sinking of the El Faro tells the story of a container ship that was engulfed by a storm. Imagine an enormous vessel stacked with dozens upon dozens of tractor-trailer cargo boxes which carry the products we use every day. Now imagine this behemoth being walloped by monster winds and waves—enough force to rip those massive containers from their fastenings. That’s exactly what happened in 2015, when Hurricane Joaquin pummeled the S.S. El Faro and its Jacksonville-based crew. Thirty-three mariners lost their lives in what was the worst shipping disaster in decades. Author Rachel Slade chronicled the crewmen’s terrifying ordeal up to the very last minutes, because the ship’s data recorder—its black box—tracked exactly what happened.

So we know that tragically, it wasn’t just Hurricane Joaquin that spelled El Faro’s end. The ship’s captain, overestimating his own skill and underestimating the weather ahead, steamed right into the storm's path, even as his crew voiced their concerns and fears. Then too, El Faro’s owner, a large shipping corporation, prioritized profits over people, Slade contends. Along with providing subpar lifeboats, they pressured the captain to deliver on-time, every time—the El Faro was the FedEx of the waters. 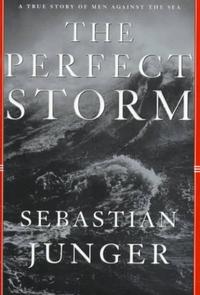 nto the Raging Sea is a story of a perfect storm of danger: horrific weather, a cavalier captain, and a profit-greedy corporation. But the book The Perfect Storm: A True Story of Men Against the Sea by Sebastian Junger is more literal, because it centers around a 1991 weather system from hell. Basically, a knot of low pressure shifted through various climates to become a whirling cyclone, then an all-out hurricane with winds that threatened to huff, puff, and blow away everything in its path.

Caught in this maelstrom like the fish in its holds was the six-man crew of the Andrea Gail, a swordfishing vessel that had just made up from a disappointing first few weeks at sea with a full catch. We don’t have a data recorder from the doomed trawler, so we don’t ultimately know what happened after the captain last radioed another vessel. But he knew his boat was in for a classic Man vs. Nature battle, saying of the weather, "She’s comin’ on boys, and she’s comin’ on strong."

Still, as an experienced fisherman, he’d ridden out many white-knuckle whitecaps before. With 100-foot waves battering the decks, the Andrea Gail may have lost all electrical systems, but the captain had one more card to play. He could’ve switched on his emergency radio beacon, which would have functioned as a mayday call. But he didn’t. This, Junger believes, means he may have been caught completely unaware the ship was going down, until it actually did.

The sinking of the Andrea Gail was devastating to the close-knit community from which most crew members hailed. Gloucester, Massachusetts is a Brandy-You’re-A-Fine-Girl kind of town: for many, the sea is their life, their love, and their lady. But we also learn that not all was lost during this wild and wicked weather of 1991. Incredible rescues saved the lives of other ships’ crews, all described in detail that keeps a Perfect Storm reader turning the page. 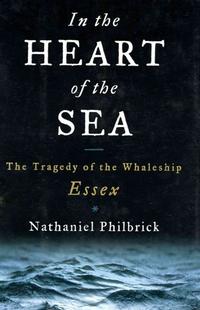 More than 150 years before the Andrea Gail tragedy, the crew of the whaleship Essex was also in critical peril, but this crew’s real trouble began after the ship went down. It is chronicled in Nathaniel Philbrick’s National Book Award-winning In the Heart of the Sea: The Tragedy of the Whaleship Essex. In 1820, all hands survived their ship’s sinking, but were left adrift in small, leaky whaleboats. And it wasn’t weather that did the Essex in—it was an abnormally large sperm whale ramming its hull.

We must consider that the whale, which had been resting just below the ocean’s surface, may have been a tad peeved that these men tried to harpoon him to death. But it was nothing personal. In 1820, whaling was big business, and the Essex was a commercial ship with a hold to fill. The slippery oil from inside a sperm whale’s squared-off head, used for everything from lubricating factory machinery to lighting up homes, was liquid gold. But sunken cargo did these men no good as they thirsted and starved, marooned 2,000 miles off the coast of South America. As crew members perished, those left took desperate measures to live. They cannibalized their dead.

Then, with neither rescue nor land in sight, the men turned to even darker methods of survival. They drew lots for executioner and victim, and it was the captain’s 17-year-old cousin who pulled the lot of unsinkable sacrifice. When the captain tried to protect him, the boy said, "No, I like my lot as well as any other." Tragically, the young man tasked with killing him was his best friend.

In all, seven men were cannibalized. Eight crew members survived. But what was never lost at sea was the story of what these men endured. The Essex’s unthinkable sinking became the inspiration for Herman Melville’s classic, Moby-Dick.

Into the Raging Sea, The Perfect Storm, and In the Heart of the Sea are ultimately narratives of survival. They are stories of natural calamities and human fallibility, but also of how we either overcome them or cope with the consequences.

Another reason I like these books? Because the next time I’m called a disaster, I can say, "Sure, but it’s not like I’m a spot of low-pressure shifting through volatile oceanic temperatures before building into a massive hurricane," or, "At least I’m not a sleepy whale with an anger complex," which would leave people thinking I’m just weird, and I’m okay with that.

Are you inspired by adventures? Then don’t miss Voyages by Road and Sea, a new exhibition exploring the legacies of Herman Melville and Walt Whitman through contemporary voices and art, on view at Parkway Central Library now through August 2020.

An artist's rendering of the S.S. El Faro in turmoil.
The author opening up: Why she enjoys reading her catch of maritime disasters.
A drawing of the whaleship Essex by the ship's cabin boy.
1 Comment | Add a Comment
I love these types of books also! I have a recommendation for you, if you haven't already read it. It's one of the most fascinating books I've ever read: In Harm's Way: The Sinking of the U.S.S. Indianapolis and the Extraordinary Story of Its Survivors
Marcela - Philadelphia