Neighborhood Beginnings: 11 Things You Should Know About Mt. Airy

In preparation for a special Free Library event taking place this Wednesday, January 15 at Lovett Library, today we'll be looking at the history and architecture of Mt. Airy. The neighborhood has a fascinating history, along with many fabulous houses, structures, and landmarks. Who designed and built these houses, and created what we know as Mt. Airy? Read below to discover more!

The Definition and Analysis of Stable Racial Integration: The Case of West Mt. Airy, Philadelphia by Leonard Franklin Heumann

The History of Mt. Airy: A Tour of Tourison will take place Wednesday, January 15 at Lovett Library at 7:00 p.m. The event is free and open to the public. 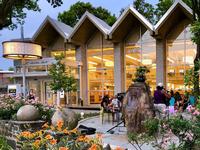 Lovett Library in Mt. Airy. Photo credit: Mt. Airy CDC
6 Comments | Add a Comment
Great blog piece. There is one error: "Mt. Airy absorbed the former villages of Pelham and Beggarstown, also known as Dogtown, as well as Blue Hill and Devilstown". Blue Bell Hill was absorbed into Germantown. The German Township went to Wissahickon Avenue. On the other side of the avenue was the Roxborough Township. The area known as Blue Bell Hill is on the Roxborough side of Wissahickon avenue. When the Walnut Bridge was built in the 1900's it was known to connect Roxborough to Germantown; the boundary of Roxborough became Wissahickon Creek (instead of the avenue). Read the historic marker. Both Mt.Airy and Germantown extended to the creek (except where Germantown borders East Falls, that's still Wissahickon Avenue). Germantown & Mt.Airy extended to the creek because when they were aborbed by the city in 1854, the Planning Commission started to redefine neighborhood boundaries. Neighborhoods couldn't cross major water bodies (Schuylkill, Delaware, Wissahickon, etc) or major highways/ state roads. Those were known to be boundaries. The Planning Commission kept the townships boundaries, but made excepts where waterbodies were located. Example: Germantown & Roxborough. BBH is considered Germantown because the section that is now known as the Mount Airy was defined as being North of Johnson Street. Dogstown was also absorbed into Germantown. Although, the debate of whether its Germantown or Mt.airy isn't a big deal; both neighborhoods were part of the German Township.
KE - Northwest Philadelphia
Thank you for clearing that up. Blue Bell Hill is right on the southern border of Mt. Airy, in Germantown, and has been since the Consolidation in 1854. Back in the 18th century and early 19th century the areas were not so well defined. I'm glad you enjoyed the post!
Sally F. - Philadelphia
You did not mention CENTRAL HIGH SCHOOL FOR BOYS
ANDREW DUNN - Washington, D.C.
You did not mention the book GETTING READY published in 1975 about the area.
ANDREW DUNN - Washington, D.C.
What about the Second Public High School in United States now located at Ogontz & Olney ? CHS 222
ANDREW DUNN - 22192
I would like more about my airy
Diane y williams