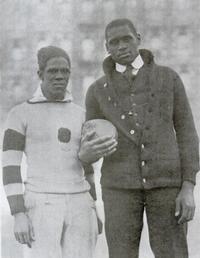 "This athlete is only nineteen years old, but he is six feet, two inches high, and weighs 210 pounds," noted the March 1918 issue of The Crisis, the NAACP’s flagship publication. Their "Man of the Month" is dark-complexioned and handsome, towering over his coach as he cradles a football in his large hand. He wears a heavy cardigan and the expression of a teen with scant idea of what his life will hold.

A portrait of him a few decades later shows a man who beams with confidence in his life’s direction. This time he flashes a charismatic smile—he is gregarious and buoyant. His gaze is looking skywards as if brighter days reside there—and they do! But they’re veiled by a scrim of clouds. This man will shine on the football field but fail in the field of law, racism barring him from using his Ivy-League degree. He’ll glow onstage and onscreen, but be shadowed by the FBI as he fights for equality. This athlete will become an actor, and this actor will become an activist. 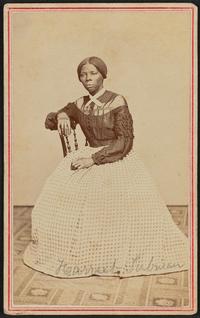 The woman posing on the spindle-backed chair is a picture of Victorian beauty. She wears a patterned silk taffeta gown, the fullness and weight of it pooling at her feet. Over the low bodice is a sheer blouse of organza, or perhaps lawn, with ruching along the upper arms and wrists. Buttons march down the yoke detail between vertical tucks, and she’s pinned a crossover band at her throat.

But her mind might not be on fashion. Her far-seeing eyes are without fear but show a hint of worry. Nothing comes easy. She’s in her middle-forties, and she’s led dozens of enslaved people to freedom through miles of treacherous wilderness. She’s donned Union blues to rescue hundreds during a wartime raid. Risking her life many times over, she’s been blessed—or cursed, because they set upon her for reasons of a childhood injury—with prophetic visions. 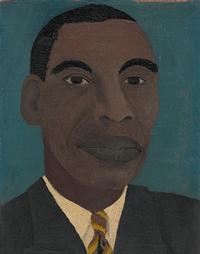 He holds the paintbrush steadily in his favored hand, but he must support his right arm with his left, as sniper fire shattered his bones during the Great War. In stark brown and grey oils, he recreates his own somber expression on canvas. 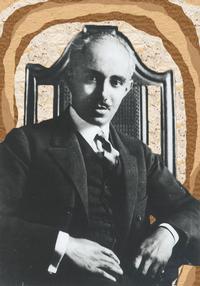 Silver-haired with a clipped black mustache, he wears a tailored three-piece suit. A blurred suggestion of carved marble frames the background of the photograph. Perhaps he designed the building he sits within. 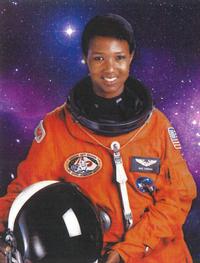 Her bulky, bright orange launch suit is made of Dacron and Neoprene-coated nylon. Layered with aluminized Mylar, Teflon, Kevlar, and Nomex, it loads twenty-eight pounds onto her small frame. She’s a world and a reality away from Lt. Nyota Uhura, the Star Trek character in a slinky red mini-dress who first sparked her interest in space. And yet, she has never been closer.

This Black History Month, uncover portraits of these heroes, and others, at the Free Library of Philadelphia during more than 85 programs and events throughout the city, each exploring captivating, courageous stories.

So mark your calendar and join us for Black History Month at the Free Library, when Philadelphians of all backgrounds will discover more of who they are through insightful and affirming programs. There's even an opportunity to literally create a self-portrait at a storytime and activity for Parker Looks Up, a much talked-about children's book about Parker Curry, a little girl who.... 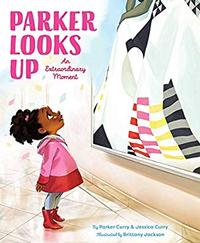 ...wears a pink-and-red coat and red rain boots, with thick grey tights. The little girl's hair is pulled back in a high, voluminous puff. Her mouth has dropped open—she’s awestruck, gazing at a larger-than-life painting of a beautiful woman in a full-skirted gown. The regal lady’s white dress is emboldened with vibrant geometric patterns that remind one of avant-garde art, or 19th-century quilting.

The photograph of the little girl staring at the painting will later splash across hundreds of thousands of screens, flashing brightly on mobile phones, tablets, and laptops across the world. The little girl will meet the woman, the photograph will become a book, and the book will end up in the laps of children everywhere, perhaps the brightest smiles alighting on the faces of other little brown-skinned girls who delight in the dream of one day meeting the woman in the painting, the woman they’ve looked up to their whole lives.

This Black History Month, what stories do you meet with awe and incredulity? Who do you admire from a past of courageousness, of brilliance, of creativity and conviction? How can your hands, gifted with their sacrifice, bring a brighter lifetime to all of us, and to those yet to come?

Someone reading these questions has answers. Who?

Celebrate these heroes and more at the Free Library during Black History Month!
Add a Comment