Hey, library lovers! Another Banned Books Week is upon us, this year extending from September 27 through October 3, as libraries around the country join forces with the American Library Association (ALA)’s Office for Intellectual Freedom (OIF) and the Banned Books Week Coalition in support of our right to read what we want, when we want!

This year's theme is "Censorship is a Dead End" and will again spotlight current and historical attempts to censor books in libraries and schools. Each year at the end of September, this important campaign brings together the entire book community—librarians, booksellers, publishers, journalists, teachers, and readers of all types—in shared support of the freedom to seek and to express ideas, even those some consider unorthodox or unpopular. The books featured during Banned Books Week have all been targeted for removal or restriction in libraries and schools. By focusing on efforts across the country to remove or restrict access to books, Banned Books Week draws national attention to the harms of censorship!

Here at the Free Library, we’ll be participating in Banned Books Week all week long, so check back here on the blog and tune in to our social media (if you'll be sharing, too, use the #BannedBooksWeek hashtag!) to learn more! In the meantime, below are a few ways you can help fight against censorship along with us: 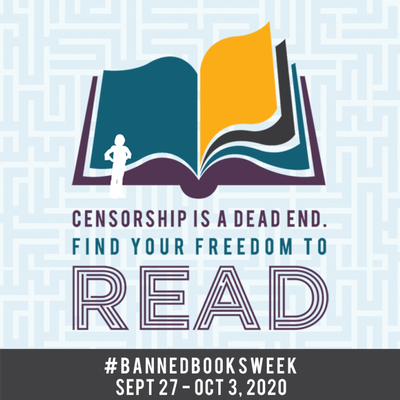 Celebrate your freedom to read during #BannedBooksWeek!
Add a Comment