These are just a few of the most over-the-top sci-fi b-movie fight scenes ever filmed, but the main event will finally take place when Godzilla squares off against King Kong for the title of King of All Monsters!

This year, March Madness has some different contenders as Godzilla vs. Kong debuts today in U.S. movie theaters, drive-ins, and streaming on-demand. But this isn't technically the first time the two have brawled, having fought each other in 1962's King Kong vs. Godzilla. This was the 3rd installment in the original Toho Studios-produced Godzilla series and the first time that each character appeared on film in color and in widescreen. The plot? A television station looking for ratings discovers King Kong on an island, and when he is brought to Japan he escapes captivity and battles Godzilla. [Spoiller alert... KONG WINS! Until, of course, Godzilla pops up in a new movie in 1964 to fight Mothra...]

The setting for this newest movie takes place in the MonsterVerse, starting in 2014 with the latest reboot of Godzilla, and then continuing with Kong: Skull Island (2017) and Godzilla: King of the Monsters (2019), as well as numerous comic book and other media tie-ins.

The plot of this film begins five years after the events of Godzilla: King of the Monsters, where Kong and Godzilla are currently the last known active Titans on Earth, as the government agency Monarch watches over all monster activity, especially underground in the Hollow Earth.

So, how do the monsters match up? Here's the tale of the tape:

Really though—don't you just hate it when your friends fight?

As a shy and awkward kid growing up watching monster movies (and yes, still watching them today), I can legitimately say that during those Saturday afternoons and late-nites in front of the television, tuned into the UHF dial, that I considered these creatures and monsters my friends. As I prepare to watch this latest monster mashup tonite, I can only hope that maybe instead of the two of them beating up on each other, they will team-up to save the day from some other menace...

Whether you need to catch up on the most recent MonsterVerse films, want to watch the original Godzilla and King Kong films, or just want to cheer on and laugh through one of the many other classic monster mashes, there's plenty to choose from in our catalog!

If there is an actual triumphant Titan crowned by the end of the movie, who do you think will win? Let us know in the comments! 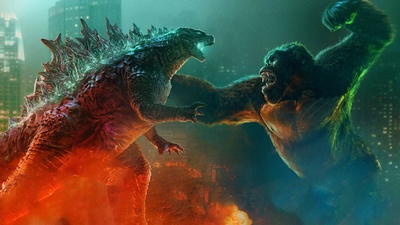 Godzilla vs. Kong
2 Comments | Add a Comment
I was obsessed with Ultra Man as a kid.
Joe Shemtov
Was reluctant to see this movie due to the devotion to both Gojirah and Kong. However, the writers provided a very satisfactory resolution to their conflict while showing the intellect of primates and reptiles. All Hail the Titans!
Tamoul Quakhaan - Philadelphia