Eight weeks of programs diving into The Tradition, Jericho Brown’s collection of poetry and the One Book, One Philadelphia 2021 title, have gone by in the blink of an eye.

We read, we wrote, we danced, we made music and art, and we discussed.

We learned about each other and listened to one another’s stories.

We asked and explored what the poems in this book meant to us as individuals, as family members, as citizens of this city and nation.

We confronted white supremacy’s traditions of state and interpersonal violence and oppression, guided by Jericho Brown’s words and sharp craft.

We celebrated traditions of resistance, invention, and love led by Black, brown, and queer communities.

In my own experience of attending these programs, I came back to the book again and again after dialogues to find that the lines in the poems had taken on new depth and meaning, new turns in understanding of how history has shaped the moment we are in, and the role I play in it.

This Wednesday, June 9, we wrap the 2021 One Book season with a very special online reading and interview with the Pultizer Prize-winning poet Jericho Brown, who will be in conversation with interdisciplinary Philadelphia poet, Ursula Rucker. Following their conversation, an intergenerational panel will discuss through the lens of The Tradition what it means to re-create our world. Examining the traditions we have inherited and how they shape the issues we face today, the panelists will explore how we envision and co-create a new world together.

The conversation will be guided by Ursula Rucker, a celebrated Philadelphia-born poet who has collaborated with numerous recording artists and producers, from The Roots to King Britt, recently releasing a new collection of haiku. She’ll be joined by the groundbreaking, world-renowned Sonia Sanchez, the first Poet Laureate of Philadelphia, one of the most influential voices of the Black Arts Movement, and the author of 18 books and countless awards and accolades, including the National Book Critics Circle Award and the American Book Award. They’ll be joined by singer, educator, and curator Yolanda Wisher, the third Poet Laureate of Philadelphia, author of Monk Eats an Afro, recipient of numerous awards including a Cave Canem fellowship, and a Founding Cultural Agent for the U.S. Department of Arts and Culture; Sheyla Street, a Central High School student activist who has served as the captain of her school’s Voter Registration Team, a three-time recipient of the Governor’s Civic Engagement Award, and a co-founder of the Philly Black Students Alliance, serving as Chairperson and leading advocacy efforts for student empowerment in the school district, mental health discussions, and anti-racism initiatives; and Kemar Jewel, a Jamaican-born international director and choreographer raised in Philadelphia who works to spotlight the talents of queer people of color and their communities through theater, music, and dance, including the video projects Voguing Train and Vogue 4 Black Lives Matter.

RSVP for the 2021 One Book, One Philadelphia Finale, taking place on Wednesday, June 9 at 7:30 p.m. EST on Zoom, and check out a copy of The Tradition from our catalog today! 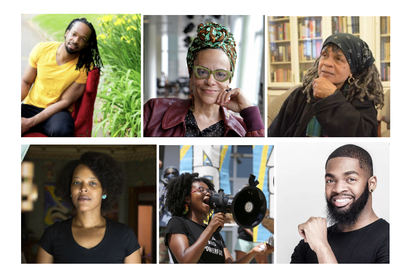