Author Frank McCourt relayed this advice while speaking to thousands of graduating students at my college commencement ceremony. McCourt, who passed away due to metastatic melanoma on Sunday at the age of 78, encouraged us to uncover our passions and follow them—to fans of McCourt’s writing, it was clear he had done the same.

Born to Irish immigrant parents on August 19, 1930 in Brooklyn, New York, McCourt returned to Limerick, Ireland with his family when he was four years old. When he was 19, McCourt struck out on his own in New York and later attended New York University. After receiving a degree in English education from NYU and a master’s in English from Brooklyn College, McCourt taught creative writing at Stuyvesant High School. McCourt retired from teaching in 1987 and set about penning his childhood memoirs, a task he had attempted during his undergraduate education.

In 1996, McCourt published Angela’s Ashes, a tale of growing up in poverty-stricken Limerick and his family’s struggles and sacrifices. The memoir, which was later turned into a film, won the 1996 National Book Critics Circle Award, the 1997 Pulitzer Prize for Autobiography, and the 1997 Boeke Prize.

Three years after the publication of Angela’s Ashes, McCourt picked up where his story left off and published ‘Tis, a memoir about his life after arriving in the United States. His 2005 memoir, Teacher Man, chronicled his experiences teaching in New York City.

The Free Library of Philadelphia was proud to host Frank McCourt on two occasions. Podcasts from his lectures, during which he discussed ‘Tis (1999) and Teacher Man (2005), are available for downloading.

“I think I’ve spent my life finding myself,” McCourt shared with my graduating class, and, as readers, we are blessed with the gift of these life stories. 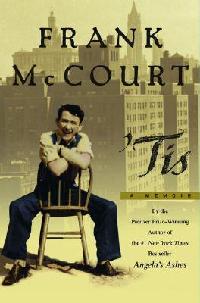 7 Comments | Add a Comment
That year, I was a lazy grad student who still had a month of degree-completing work ahead of him. I really regret not going now.
Dave Allen - Philadelphia
Sad news, McCourt is one of my favourite authors of the past 15 years. My respects to his family. .
Neil - UK
Author Franklin was a really great man with really idealistic point of views. I really love his books and will be a long time fan of his. It is a shame he had passed away.
Albert - California
I read Angela's Ashes and was hooked. I was disappointed with the film as I thought it was dark and lacked the childhood humour the book had so wonderfully conjured up. T'is was also a brilliant reads. He will be sadly missed.
TraceyJoy - UK
Angela's Ashes will always be one of my favorite books. Frank was a genius.
Chance Dayton - NYC
Let us prevent skin cancer by learning how to prevent it right from the start. There are some steps anyone can take to prevent the development of melanoma www.skindermatologist.net
John Kingston - Singapore
John Kingston - Singapore