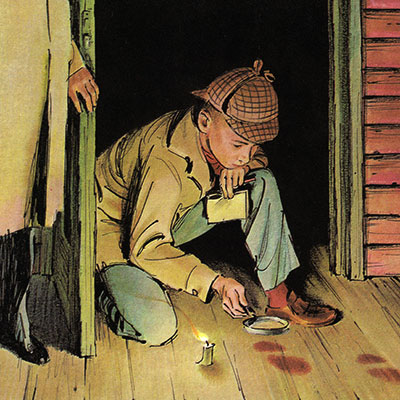 Becoming the Detective: The Making of a Genre

Born in 1841, from the mind of Edgar Allan Poe, the detective story has long captured readers’ imaginations. Becoming the Detective: The Making of a Genre explores the story’s development and its readers’ integral role.

Although savants like Sherlock Holmes popularized the genre, in time it was not enough to stand by like Dr. Watson and narrate convoluted clues. Instead, readers wanted to solve the mystery themselves. By 1928, the golden age of detective fiction, formal rules determined whether the reader had a fair chance—a challenge for writers, who were both praised and vilified for their management of this contract. The new constraints forced a character-driven evolution, as in the darker hardboiled genre.

Becoming the Detective: The Making of a Genre goes beyond the page, exploring detective stories on stage, radio, film, television, and in board games like Clue. The exhibition features Poe’s manuscript for “The Murders in the Rue Morgue,” movie posters of Sherlock Holmes, first editions of Hardy Boys novels, and Choose Your Own Adventure books.