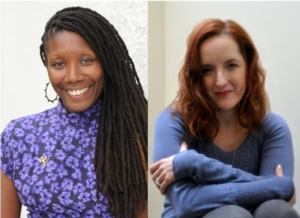 Here Comes the Sun, Nicole Dennis-Benn’s debut novel about a young Jamaican struggling to protect her sister and village as she experiences feelings for another woman, was a finalist for the National Book Critics Circle Award and the New York Public Library’s Young Lions Fiction Award and was named a New York Times Notable Book of the Year, among other honors. Her new novel, Patsy, follows an undocumented Jamaican immigrant’s travails in Brooklyn.

Rebecca Makkai’s books include The Borrower, Music for Wartime, and The Hundred-Year House, which won a Book of the Year Award from the Chicago Writers Association. Her stories have appeared in Harper’s, Tin House, and The Best American Short Stories, among other publications. Shortlisted for the National Book Award and winner of the Andrew Carnegie Medal, Makkai’s latest novel interweaves fine art, the tragedy of the 1980s and ’90s AIDS crisis, and the tumult of the contemporary world.