Evaline (Michelow) Ness was born April 24, 1911, in Union City, Ohio, and grew up in Pontiac, Michigan. She attended Ball State Teachers College (1931-1932) and the Chicago Art Institute (1933-1935) before quitting to become a fashion artist and model. In 1938, the famous Prohibition agent Eliot Ness became her second husband. During World War II, while he led the effort to stamp out venereal disease on army bases, she studied at the Corcoran Gallery of Art. She continued her successful career as an illustrator in New York after their divorce in 1946. She studied abroad at the Accademia di Belle Arti in Rome from 1951-1952, and in 1954 illustrated her first book for children, The Story of Ophelia by Mary Gibbons. Josefina February (1963), the first book that Ness both wrote and illustrated, evolved from a series of her woodcuts on Haiti. Ness was praised by critics for her inventive illustrations and her ability to work in a wide variety of media. She won many awards as an author and illustrator for children, including a Caldecott Medal for Sam, Bangs, and Moonshine in 1967. Ann Durell, the editor of Sam, Bangs, and Moonshine, praised Ness’s mastery of diverse artistic methods: “Rather than imposing limitations, the techniques with which she is always experimenting open new dimensions. . . It is a rich and heady education in graphic arts to work with her on a book.” Coincidentally, Ann Durell was also Lloyd Alexander’s editor. It is perhaps this connection that led Ness to illustrate Alexander’s Prydain series, the artwork for which makes up the bulk of this collection. Ness’s designs for these books display her trademark inventiveness, using cut and torn paper, collage, paint, woodblock printing, colored pencil, pastel, and charcoal in vivid, striking compositions that convey the excitement and adventure in Alexander’s books. Ness continued to write and illustrate children’s books through the early 1980s. She died on August 12, 1986, in Kingston, New York.

Something About the Author Autobiography Series, vol. 1.

This collection contains dummies, sketches, paste-ups, preliminary and finished artwork, and color separations for eight books illustrated by Evaline Ness. The majority of the collection consists of illustrations and book jacket designs for Lloyd Alexander’s Prydain series: Coll and His White Pig, The Truthful Harp, The Book of Three, The Black Cauldron, The Castle of Llyr, Taran Wanderer, and The High King. There are also a small number of illustrations by Ness for Old Mother Hubbard and Her Dog, written by Sarah Catherine Martin.

This collection is arranged into series alphabetically by title: I. The Black Cauldron; II. The Book of Three; III. The Castle of Llyr; IV. Coll and His White Pig; V. The High King; VI. Old Mother Hubbard and Her Dog; VII. Taran Wanderer; VIII. The Truthful Harp. Within each series, materials are arranged in probable order of creation.

The processing of this collection was made possible through generous funding from The Andrew W. Mellon Foundation, administered through the Council on Library and Information Resources’ “Cataloging Hidden Special Collections and Archives” Project.

The right of access to material does not imply the right of publication. Permission for reprinting, reproduction, or extensive quotation from the rare books, manuscripts, prints, or drawings must be obtained through written application, stating the use to be made of the material. The reader bears the responsibility for any possible infringement of copyright laws in the publication of such material. A reproduction fee will be charged if the material is to be reproduced in a commercial publication.

Some of the materials in this collection may be too fragile for use without the Curator’s supervision. 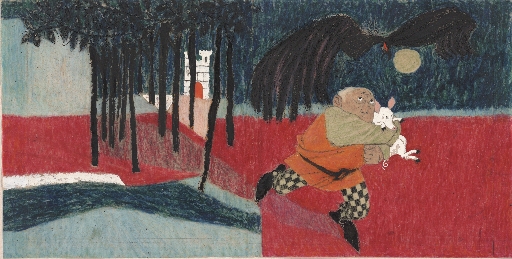 Expand All | Collapse All