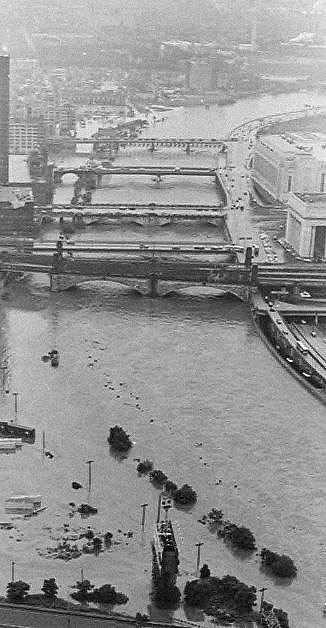 This June 23, 1972, image shows an aerial view of flooding of the Schuylkill River alongside 30th Street Station (on the right), the day after the heaviest of the rainfall in Philadelphia, from Hurricane Agnes.  While nowhere near the upstate devastation from Agnes in the Wilkes-Barre area, the flooding of the Schuylkill in Philadelphia still had a major impact in the city.  The bridges pictured, from the bottom up, are the SEPTA Regional Rail Bridge, the JFK Boulevard Bridge, the Market Street Bridge, the Chestnut Street Bridge, and the Walnut Street Bridge.