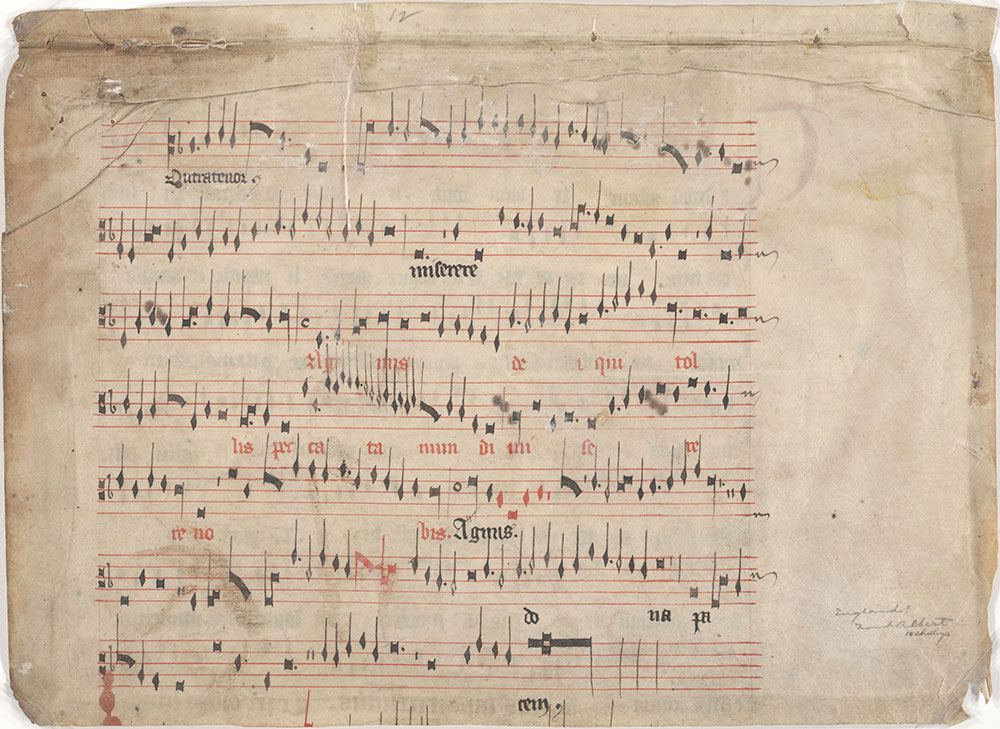 Te deum is the verso, ‘contratenor’ the recto.

The pencil annotation should be corrected to: English origin, 1420s.

Upper half leaf from an English choirbook probably of the 1420s. Overall height of the half-leaf is 23.4, width  32.2 cm. Red staves ruled with a 15mm rastrum. Stave length on verso 210mm, on recto 211mm.  Text in a good liturgical gothic.

Recto: Complete contratenor part of an Agnus dei on 7 staves. Red text for Agnus 2 probably indicates that it was set as a duet, the Contratenor here serving for that section as the tenor part. This side lacks a capital letter and also lacks the yellow wash used on the verso. Mensurations [O] C O, with void semiminims and red imperfection coloration. Stems of another part (either a tenor with significant minim movement or a different piece) are visible from the missing 8th stave.

Verso: First seven staves of the top part of a setting of the Te deum, with red capital T (not indented). Plainsong intonation in red, and chant paraphrase continued in this part. Unsigned tempus perfectum with red imperfection coloration which, on this side of the leaf seems to be partly entered over black or back void notes.

No concordances are so far identified. The script shows some variation, and in general appearance the fragment is not unlike the main hand of the lost royal choirbook partially reassembled by Margaret Bent ("The Progeny of Old Hall:  More Leaves from a Royal English Choirbook," Gordon Athol Anderson (1929-1981) in Memoriam.  Musicological Studies 49, vol. 1, 1-54.  2 vols.  Henryville, Ottawa, and Binningen:  Institute of Mediaeval Music, 1984). However, there is not yet sufficiently strong reason to add this leaf to that collection.

Our thanks to Dr. Margaret Bent of All Souls College, Oxford for the information on this leaf. 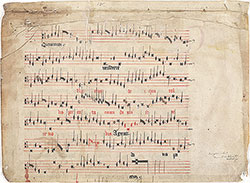 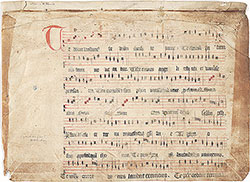